Next Year Will Be The 'Year Of' Mobile: For Video, Anyway

As far as media consumption milestones go, 2016 could well be “the year” for two important media: mobile and video. According to new estimates released this morning by Publicis’ ZenithOptimedia unit, next year will be the year that more people watch video on a mobile device than a non-mobile device.

The milestone is significant, the agency’s analysts say, because online video itself is one of the fastest-growing media and is on the verge of disrupting an even more dominant video consumption platform: television. While worldwide television consumption has continued to expand despite the onslaught of new digital media options -- especially video ones -- ZenithOptimedia forecasts the accelerated adoption of digital video consumption will finally begin to take negatively impact linear TV viewing next year.

The agency predicts the number of people watching conventional linear TV will peak this year and will decline for the first time in 2016, largely due to consumer adoption of digital video options -- especially mobile.

“We forecast that the number of regular linear TV viewers will rise 3.1% in 2015 but then shrink by 1.9% in 2016 and 0.9% in 2017,” the report asserts, adding that “the amount of time people spent watching linear TV has been in slow decline for several years [and] we now predict that next year the number of viewers to start to decline as well.”

Not surprisingly, the report also predicts that ad spending will begin to follow suit and online video will begin taking share away from traditional TV ad budgets.

“Advertising expenditures on online video will soon account for an eighth of total Internet ad spending,” the report predicts, estimating it will reach $16.1 billion worldwide this year and will expand to $23.7 billion in 2017. 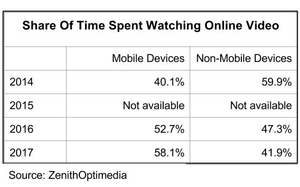 ad spending, forecast, mobile, online video, tv, video
2 comments about "Next Year Will Be The 'Year Of' Mobile: For Video, Anyway".
Check to receive email when comments are posted.
Read more comments >
Next story loading