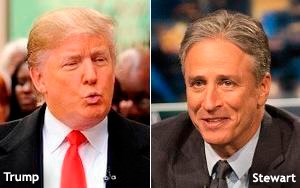 The summer TV doldrums will be enlivened Thursday night by a confluence of high-profile events, each standing in diametric opposition to the other.

The irony here is that this two-hour debate -- broadcasting live from Cleveland starting at 9 Eastern on Fox News -- is the kind of event that has supplied Stewart with comic material for more than 15 years, and he won’t get a chance to take advantage of it.

That’s because this two-hour debate is not due to wrap up until 11 p.m. Eastern, and that happens to be the start time for Stewart’s last “Daily Show,” which in all likelihood will have been taped earlier. Moreover, as a final show, it is presumed that “The Daily Show” will be devoted more to Stewart’s farewell remarks, surprise guest-stars and other bits than to an event taking place that very same evening.

So, like two ships passing in the night, Stewart’s “Daily Show” will sail right by the first GOP get-together of this type in the current 2016 election cycle -- and never the twain shall meet.

It’s difficult to say which of these two Thursday night TV events will get greater coverage in their respective aftermaths, though I suspect they will both figure prominently on newspaper front pages and news Web site home pages in the wee hours of Thursday night and into Friday.

The debate coverage will focus primarily on Donald Trump -- namely, any potentially inflammatory statements he might utter, and whether or not he will attack his various opponents. The Stewart coverage will be all about how much his fans will miss him, what he said, and who turned up to help him say good-bye.

As for the details of these two telecasts, the Fox News debate will originate from the Quicken Loans Arena in Cleveland (home of the Cavaliers). It will be moderated by Fox News personalities Megyn Kelly, Bret Baier and Chris Wallace. As I write this on Tuesday morning (Aug. 4), the slate of Republican participants in the debate has not yet been set, even though just two days remain until this event.

That’s because there are so many GOP candidates now in the race -- as many as 16 by many counts -- that Fox News cannot let them all up on stage at the same time. However, various reports indicate there will be 10 candidates in the prime-time debate. (The remaining candidates will be given a chance to participate in a televised forum scheduled to air live at 5 p.m. Eastern on Fox News on Thursday.)

Fox News will be making its final determination of candidates’ eligibility for the prime-time debate based on poll results that are due to be released on Tuesday. Certainly, a number of GOP contenders are already presumptive participants -- frontrunners Trump, Jeb Bush and Wisconsin Gov. Scott Walker, according to this rundown on CNN.com.

Meanwhile, Comedy Central is keeping a lid on the details surrounding Jon Stewart’s farewell show. The only thing the cable channel’s press office is revealing is that the show will be “extended” in length, which means it will run past 11:30 -- but for how long and how late, no one knows.