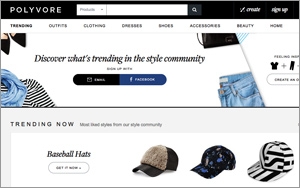 What does Yahoo want with the fashion shopping Web site Polyvore, where mobile app visitors rose 36% in June 2015, compared with the year-ago month, according to comScore. Here's a hint.

The unconfirmed reported price of $200 million in cash got Yahoo lots of content, mobile app, video advertising, and another network in which advertisers can choose to serve Gemini advertisements, both native and search.

While Polyvore, a visual search engine for clothing and outfits, generates revenue through affiliate marketing, Polyvore's active users produce tons of content on the site by arranging images of clothing into outfits and sets of outfits. Some brands pay to feature their collections, while others pay to promote certain fashion trends or individual products.

Advertising agency executives at Jellyfish, Ecselis, and DigitasLBi in an earlier interview told Search Marketing Dailythat content supported by Gemini produced better than average returns on investments because Yahoo can control the quality across its network.

Polyvore cofounded in 2007, by three former Yahoo engineers, keeps Jess Lee at the helm as CEO. She previously was a Google product manager from 2006 to 2008, and also worked as a software engineer intern at NTT DoCoMo. In an interview with Lee published in 2013, Wired reports that Lee "was a protégé of hard-driving VP Marissa Mayer and worked as a product manager on Google Maps."