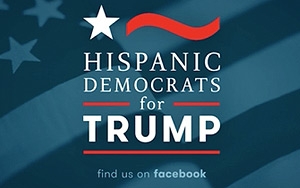 Ad agency TDA_Boulder has regularly tackled pop culture moments for its clients, including developing creative that celebrated sluts after the Rush Limbaugh/Sandra Fluke controversy and gave away condoms in light of the Supreme Court's Hobby Lobby decision.

Now, the agency is wading into politics with the “Hispanic Democrats for Trump” initiative.

TDA_Boulder’s stated motive is to “call out a bully and a bigot” and utilizes its skills to help temper his popularity through an advocacy group, social media outreach and traditional media.

In all, the concept uses humor to convey how Trump is actually helping Democrats with his stated belief that Mexicans are criminals.

The young adults in the ad share the lines: “I hope Donald Trump wins the Republican primary. Sure he’s a bigot. Big bigot. But polls indicate, there’s no way he could ever win a general election. So every time Mr. Trump says something offensive, to me or anyone else...he’s one step closer to putting a Democrat in the White Hose.” The ad ends with another thank you to the Republican candidate "for supporting the Democratic Party in 2016."

A Facebook page details the agency's mission this statement: “We’re not a political party... we are an advertising agency. But an advertising agency with some ethics and good intentions, and we don’t like bullies. This video is our unified stand on behalf of our co-workers, peers, friends and family members who are Hispanic. We’re offended by Mr. Trump’s assertions concerning Hispanic members of our community.”

"For the most part, I think [clients] appreciate that we have a point of view," says Jonathan Schoenberg, executive creative director, TDA_Boulder. "I can't recall clients ever being critical of work we have done that is social or political in nature. If one of our clients is a big advocate for Mr. Trump that is disappointing, but we must respect their position, and hopefully, they could appreciate our point of view as well."

The TV spot debuted during Comedy Central's "The Daily Show" how on August 6 in Denver and will also appear on New York stations. The campaign is supported across social media and with paid Facebook advertising.