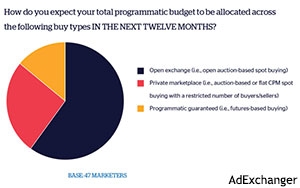 Publishers continue to adopt programmatic ad technologies, with nearly one-in-four (24.8%) saying that programmatic accounts for at least 40% of their total ad revenue today.

Last year, 16.5% of publishers said programmatic accounted for at least 40% of their ad revenue, and at this point next year, over one-third (36.2%) of publishers expect to reach that mark.

“Programmatic is no longer just a way to sell remnant inventory -- it is proving to be an effective monetization method for publishers as well,” stated Catherine Oddenino, analyst at AdExchanger Research and author of the report.  “As we look toward the future, we will finally see revenues start to catch up with inventory.”

Perhaps because “programmatic is no longer just a way to sell remnant inventory,” as Oddenino notes, the shape of the market is changing. For example, nearly three-fourths (71.9%) of programmatic budgets are allocated to open exchanges right now. That number is expected to decrease to 63.6% by 2016 in favor of private marketplaces and programmatic guaranteed (also referred to as “programmatic direct”).

The story is a little different on the mobile front, however. While mobile programmatic is growing, it’s not sticking quite as well -- at least in terms of programmatic guaranteed or private marketplace options.

“Mobile inventory, though, is growing and publishers haven't found a strong way yet to monetize mobile through PMPs, which will keep the overall percentages roughly the same in the next year,” Oddenino said.

“Mobile for [private marketplaces] is lagging behind,” the report quotes Kavata Mbondo, VP of yield management and programmatic at Time Inc. as saying. “It’s improving but it still remains a gap," Mbondo added.

The report also quotes Jeremy Hlavacek, VP of programmatic at The Weather Company, as saying: “We need a solution for mobile [private marketplaces] because that’s where the inventory is shifting.”

“The finding that stood out to me the most is the challenge publishers are facing as more inventory shifts to mobile,” Oddenino remarked. “It was a pain point brought up by almost every publisher I spoke with for this report.”

However, publishers and marketers don’t see eye-to-eye on every “pain point” in programmatic, the report reveals.

For publishers, “vendor complexity” is considered the No. 1 challenge in 2015. Despite this, the number of tech partners each publisher uses is increasing -- a finding that caught Oddenino's attention.

“I was surprised by the willingness of publishers to integrate many more technologies than they may actually need because marketers are asking for it,” Oddenino said. “While programmatic is frequently viewed as cutting out the need for as many people to be involved, these sorts of integration requests by marketers can actually make programmatic selling require as much human involvement as direct sales at the launch of a big ad buy.”

A lack of understanding about programmatic technologies is the No. 2 challenge publishers currently face, followed by inventory quality issues and transparency concerns.

Inventory quality was the No. 1 concern for 27% of agencies and nearly 25% of marketers. In contrast, only about 10% of publishers felt this way.

There are still some codes to crack -- namely in mobile, per the report -- but given the fact that the money is expected to flow through more premium channels in the coming months (i.e. programmatic guaranteed or private marketplaces), it's fair to surmise that buyers and sellers alike are interested in upping the quality of inventory traded via ad tech.

AdExchanger Research’s “The State of Programmatic Selling, 2015” report can be found here.