Stewart Faithful Prepare To Say Good-Bye To Their Ranting Hero 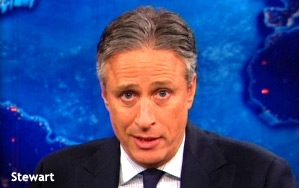 A comparatively small group of people will be very sad Thursday night when Jon Stewart says farewell after nearly 16 years on “The Daily Show.”

His audience, which sometimes rises to as many as 1.7 million viewers or more, will undoubtedly miss his nightly rants and bleeped f-words about the people and things that bother him -- mainly, Fox News Channel and Republicans.

Stewart’s final “Daily Show” starts at its usual time of 11 p.m. Eastern, but a news release that arrived this past Monday from Comedy Central warned that the show will be “super-sized,” which means it will be longer than its customary half-hour.

Stewart’s fans will be grateful for the extra time they’ll get to spend with their hero, who so incisively identified the foibles and missteps of our news media and political leaders (mostly Fox News and Republicans, but on occasion, some others) for lo these many years.

The Stewart faithful have already been flocking to his shows this week in anticipation of his finale. On Monday, “The Daily Show” with guest Amy Schumer averaged 1.712 million viewers, according to Nielsen numbers reported by Variety. It was the highest same-day audience for “The Daily Show” since last December.

On the show, Schumer told a snoozer of a story about her recent vacation with a group of old pals plus a new friend she has recently acquired and seems to name-drop all over the place -- Jennifer Lawrence. Before this guest segment, Stewart ripped into the billionaire Koch brothers and the apparent power they hold over some of the Republican presidential candidates who seek funding from them.

Stewart showed a picture of a fat sow with the head of one of the Kochs that was being suckled by a half-dozen or so GOP presidential hopefuls. Stewart also made an obscene gesture simulating oral sex in a reference to Wisconsin Gov. Scott Walker and went after Fox News Channel, which included airing a mash-up that “The Daily Show” has shown before called “50 Fox Lies in 6 Seconds.”

On Tuesday’s show, which featured guest Denis Leary, Stewart again lit into the Republican candidates and the great number of them (17? 18?) -- no one seems to know). To give Stewart his due, he also addressed the democratic side of the presidential race and even hung a new nickname on Joe Biden, “The Great Gaffesby.”

“I shouldn’t complain about the Republican race being such a circus,” Stewart conceded. “At least it’s fun to watch. The democratic primary is basically one joyless Bataan death march to a Hillary Clinton nomination.”

Tuesday’s show drew an audience of 1.58 million people, Variety said. In the show’s final moments, Stewart took up the opportunity to plug a new book about animals written by his wife, Tracey.

Louis CK was Stewart’s guest on Wednesday’s show, for which ratings were not available yet on Thursday morning. Louie thanked Stewart -- “on behalf of all comedy” -- for all his hard work on “The Daily Show.” The two then talked about how long they’ve known each other.

“I feel that what we’ve built here is a monument to evisceration,” Stewart said in an earlier segment, as he displayed headlines about “The Daily Show” that have appeared over the years in which the word “eviscerate” and its many variants were used.

Stewart then looked back at some of the targets his show has “eviscerated” -- ranging from ISIS to, you guessed it, Fox News Channel -- and then concluded that his show had no impact whatsoever. “The world is demonstrably worse than when I started!” he exclaimed, seeming to turn red in the face and feigning anger and frustration in the manner his loyal followers seem to love.

What’s in store for Thursday night’s finale of the Jon Stewart “Daily Show”? Aspects of the show are difficult to predict, particularly how Stewart and his producers will fill the episode’s “super-sized” and indeterminate length. However, I’ll go out on a limb here to take a wild guess that Stewart will rail about Fox News Channel and Republicans.

Who knows? Maybe they’ll find a way to eviscerate Thursday night’s Republican debate on Fox News Channel after all.