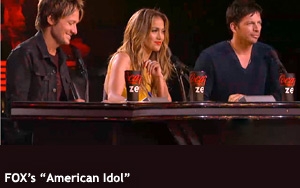 Adjusted fourth-quarter fiscal revenues for Fox were down 9% to $6.84 billion -- due to lower revenue from its filmed entertainment division, which declined 32% to $1.907 billion.

Quarterly TV advertising revenues sank a big 14%, due to significant ratings declines on the Fox network from lower viewership of “American Idol” and “The Following” versus the same period a year before.

Cable network programming, however, a big Fox revenue generator, continued to deliver strong results -- up 6% to $3.568 billion. Domestic advertising revenue was down 2% with domestic affiliate revenue gaining 12%. International advertising for its TV businesses grew 14% -- with big help coming from its STAR and Fox Turkey operations.

Filmed entertainment revenue sank because of the absence of revenue from Endemol Shine Group -- around $70 million.
The unit also produced fewer episodes of “Glee” and none for the new season of “24,” which lowered revenues, as well.

Its theatrical unit also had a difficult comparison to the year before when it had big releases “X-Men: Days of Future Past” and “Rio 2.”