Gifford's Death Revives Memories Of TV In A Much Different Era 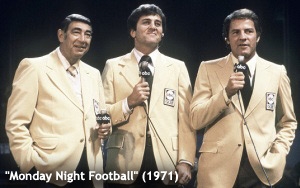 It takes nothing away from the intelligence and intuition of the late Roone Arledge to attribute at least part of the phenomenal success of ABC’s “Monday Night Football” in its heyday to the kind of random good fortune that can sometimes turn a good idea into a great one that exceeds all expectations.

Or to put it another way: You can apply all the know-how and common sense you can muster to mix and match personnel according to their similarities and differences in the hopes that the combination will somehow click. But once they’re up and running, the chemistry that results -- or in many cases, doesn’t result -- is largely a matter of factors beyond one’s control such as timing, fate and the aforementioned luck.

Such was the case in 1971 in the second season of “Monday Night Football” when Arledge added Frank Gifford to the announcing team in which Howard Cosell and Don Meredith were already established. Gifford was Arledge’s choice for the third slot from the beginning, but Gifford was contracted to CBS Sports in 1970 and unavailable. In 1971, Gifford came over from CBS to replace Keith Jackson on “Monday Night Football,” and the rest was history.

Gifford’s death over the weekend at age 84 is reviving memories of a period in TV history where everything seemed outsized -- the stars, the shows, the ratings. At the risk of sounding like Norma Desmond in “Sunset Boulevard,” TV did seem bigger then (and, by contrast, smaller now -- despite the explosion in channels and content).

Many readers of this blog understand the reason why this is so: With the entire U.S. TV audience being divided principally between just three TV networks from the 1950s at least through the 1970s, virtually every show -- even the ones that were considered low-rated and were cancelled -- drew bigger audiences than many shows today that are critically acclaimed, widely talked about and considered to be hits.

It’s simple arithmetic, really -- a concept (think of a huge pie being divided in just three ways instead of hundreds) that is so elementary that some might question the need for bringing it up every once in a while.

But as the years go by, the history of TV in the three-network era becomes more and more remote -- similar to how many of us viewed the radio era when our parents or grandparents would tell us about it when we were children in the 1960s. We’d take it all in, but couldn’t really get our minds around a world without TV. Similarly, younger people today might have trouble conceiving of a world of just three TV networks. But please take my word for it -- such a world did exist.

In this world, a colorful team of sports announcers became a phenomenon that turned a weekly football broadcast into one of the most talked-about TV shows of its era. You might say Cosell was the chief catalyst for the success of “Monday Night Football” in those heady days, but he was just one part of the peculiar alchemy that made this team of announcers click.

Maybe it came down to a kind of regionality. Cosell was the bombastic one with a streetwise, tell-it-like-it-is New York attitude. Meredith, a native Texan, perhaps represented the middle of the country. And Gifford was West Coast all the way -- the handsome matinee-idol football star from the University of Southern California who became a Hall of Famer on the then-legendary New York Giants of the 1950s.

As the play-by-play announcer, Gifford was the no-nonsense straight man in the booth, while Meredith and Cosell sparred. Who knew this combination would work? Maybe Arledge was pretty certain of it, but even he must have known that there is no such certainty in the business of putting a broadcast team together.

Ironically, the same could be said of Gifford’s wife, Kathie Lee Gifford, and her pairing with Regis Philbin in the 1980s that also became a phenomenon beyond anyone’s wildest dreams. I often said that Regis and Kathie Lee were a match made in TV heaven, and one that was not necessarily evident from the outset.

Many of us who are old enough to remember Frank Gifford from that bygone era were surprised to learn that he was 84 when he died on Sunday. Bewildered, we looked at each other and wondered: When did that happen?

sports, tv
3 comments about "Gifford's Death Revives Memories Of TV In A Much Different Era".
Check to receive email when comments are posted.
Read more comments >
Next story loading