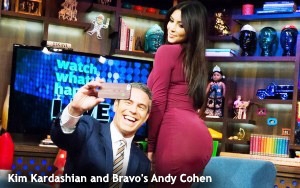 He was mad as hell and he wasn’t going to take it anymore.

So an Orlando news anchor last Friday walked off the set of the local Fox morning show “Good Day Orlando” so that he would not have to participate in the “reporting” of yet another story about the Kardashians.

The anchor -- John Brown of WOFL/Fox 35 in Orlando, Fla. -- didn’t exactly erupt like Peter Finch in “Network,” but he made his point just as clearly. He stated simply that he was having too good a day to let it be dragged down by joining in a conversation about the Kardashian Story of the Day, which happened to be this gem (drumroll, please): Kylie Jenner had just obtained a new pet rabbit and named it “Bruce.”

“I am having a good Friday, so I refuse to talk about the Kardashians today,” Brown said, according to this story on the Hollywood Reporter Web site, where you can also view the video.

“You are on your own, Amy,” he said to co-anchor Amy Kaufeldt. “I’ve had enough Kardashians. I can’t take any more Kardashian stories on this show.”

Even after he was out of camera range, Brown’s mic was still hot, and he could be heard saying: “I don’t care about this family. I’m sick of this family. It’s a nonstory! We’re talking about the family every freakin’ day on this show. Nobody cares about this family anymore! I’ve had enough,” he said.

There was no word on how station management reacted to Brown’s one-man protest against yet another idiotic Kardashian story. He later posted an apology of sorts, along with the video, on his Facebook page. “Sorry I lost my mind a bit,” he wrote, and then insisted “it was partially in jest! … I did feel better though after it was done.”

Well, bravo to him. He took a stand, however fruitless, against the dumbing down of local TV news. I have no idea how many Kardashian stories it took to drive this anchorman over the edge. A search of the WOFL Web site doesn’t really yield all that many stories. Sure, there are some -- but they hardly seem to be a feature of the station’s morning show every day (unless the site’s search feature doesn’t work properly, which is entirely possible).

Still, anyone who watches local TV news on a semi-regular basis -- whether in the mornings, evenings or after prime time --  knows what Brown is talking about. As a local news viewer, you’re not only feeling frustrated by inane stories reported almost daily about the Kardashian-Jenner clan. It’s also the near-constant litany of celebrity stories (usually gossip items ripped from who-knows-where on the Internet and then blithely repeated), and the relentless emphasis on social media.

You can hear news anchors saying things like this every night on local TV newscasts these days: “Here’s how the Twitterverse reacted to [insert story]!” Or “Go to our Facebook page and tell us what you think about the story we just told you about [insert lame “lifestyle” topic here]!”

One of the things that is so striking about the preponderance of these kinds of stories is how high they’re appearing on the local newscasts’ news lists. It would be one thing if stories about celebrities and their pets were relegated to much later in the newscast, after all the “serious” news gets dealt with.

But more and more frequently these days, the fluff is rising to the top. You’re only five minutes into some local TV newscasts, and you’re already being told by some giddy anchorperson about a “video that just went viral” featuring a cat doing the Macarena. At such times, you’re left to wonder: Didn’t anything more important than this take place somewhere in the world today?

Why is this occurring? My theory: Local TV news managers must believe that stories about celebrities, viral videos and Kim Kardashian’s latest butt selfie (like the one Bravo’s Andy Cohen is seen taking in the photo above) are the key ingredients in a “secret sauce” that they need to slather on their newscasts to attract younger viewers. Grabbing YouTube videos and rewriting gossip items from the Internet is also a cheaper way to fill airtime than all of those actual news stories that require time, effort, personnel and money to produce.

So three cheers to John Brown of WOFL in Orlando, although it’s doubtful that stories about dancing-cat videos will disappear from local TV news anytime soon.