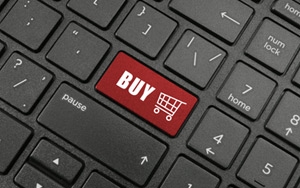 Brands using Demandware, IBM WebSphere Commerce, Shopify and eBay's Magento ecommerce platforms got a boost by gaining the ability to add a "buy button" to emails, catalogs, social sites, SMS, videos, or any other media. It also enables them to add the button to search queries with a little extra finagling.

The XpressBuy partnerships announced Wednesday make the ecommerce feature accessible to more than 10,000 retailers such as LLBean, Macy's, and Neiman Marcus, estimates Murali Subbarao, the company's CEO and founder.

The integration between XpressBuy and the ecommerce platform providers takes consumers to a landing page. Using Neiman Marcus' LookBook as an example, Subbarao said clicking on the image in an email takes the consumer to a landing page or catalog specific to the collection of products advertised in the message. The brand optimizes the page for mobile or desktop. The page provides more information about the products, but it also allows the consumer to complete the sale through a buy button supported by one of XpressBuy's new partners.

The engagement data remains with the retailer, and aggregates the information when the button appears across several media channels.

Adding a buy button to a text-based search advertisement or sponsored query requires the ad to have an image because the technology sits behind an image.

Subbarao said the technology would work well in sitelinks or images running alongside search query listings on Bing, Google and Yahoo given the approval by search engines, the real benefit today for brands point to the ability to add the buy button to a variety of media, including catalogs on a brand or retail Web site.

The "buy button" landscape has become a bit crowded of late, turning the most obvious and non-obvious places across the Web into marketplaces. Google plans to roll out its version allowing consumers to purchase certain items directly from Google Shopping. Facebook has been testing a buy button on some of its small and medium-sized businesses within ads and page posts. For example, Misty's List -- a cross between eBay and Angie's List -- supports Star Valley residents in Wyoming by offing a way to connect with plumbers, gardeners and other types of services, but it also lists events and items for sale such as cows and farm equipment from local residents.

The Facebook-hosted page run by Misty Hoshaw Buchanan has more than 9,000 members. A buy button on any one of those images would allow sellers and buyers to transact business online. In this case it's not likely they would use XpressBuy, but rather the Facebook API to make the transaction.