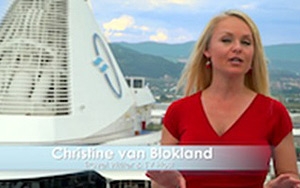 The eight videos, which launch the week of Aug. 17, feature Blokland as she cruises the Mediterranean aboard Oceania Cruises’ ship, Riviera.

This is the brand's very first television sponsorship after years of solely focusing on other types of marketing like direct mail and marketing to travel agents, who are responsible for around 80% of all bookings.

Oceania is geared toward consumers who desire innovative dining, cooking classes at sea and culinary excursions. Cruises range in price from $2,799 per guest for an 8-day voyage to upwards of $12,399 for a 34-day cruise from Stockholm to Rome.

Two of the fleet’s ships, Marina and Riviera, offer what the company claims is the first hands-on culinary school at sea. The foodie focus was the brainchild of Norwegian CEO Frank del Rio, who created Oceania Cruises. He continues to handpick each culinary discovery tour, which involves experiencing local markets and off-the-beaten path spots at each port (such as making authentic Italian cannoli in an Italian bakery).

Oceania has experimented with paid television in the past with mixed results, says James Rodriguez, senior vice president, sales and marketing for Oceania Cruises.

“But the sponsorship deal with ‘Curious Traveler’ is much more than a paid placement,” Rodriguez tells Marketing Daily. “It’s why we’re so excited about the partnership. Not only does the two-year deal give us an ongoing television presence, but the talented team at Curious Travel is developing a collection of video assets that we can leverage across a wide variety of digital platforms, helping us to further expand our reach.”

The effort targets the cruise company’s target “discerning and sophisticated traveler.” A majority of guests on the ships are post-family and fairly affluent, he adds.

“We know our target audience are avid viewers of PBS programming,” Rodriguez says. “And since they are also passionate about travel, they enjoy consuming shows, books and magazines that discuss travel destinations. Partnering with ‘Curious Traveler’ was a natural fit -- the show is available on PBS stations around the country and offers a new, inventive way to showcase a topic our guests are passionate about, and that’s travel.”