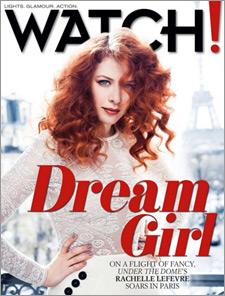 Watch!,a new entertainment magazine from CBS, has struck a distribution deal with Walmart that will give it a newsstand presence in over 2,000 of the retail giant’s stores across the U.S. The bimonthly glossy will go on sale in Walmart stores beginning with its October issue.

Launched by CBS earlier this year, Watch! gives readers a mix of celebrity features, beauty, fashion, travel and wellness content, with a focus on CBS TV shows and stars. For example, recent features have included “Elementary” star Jonny Lee Miller visiting Baker Street in London and the stars of “Two Broke Girls” on a shopping trip in Milan.

This agreement represents a considerable expansion of Watch!’s existing newsstand sales network, which already includes Barnes & Noble and Hudson News, among other retailers. Watch! has also built a subscription base of over 180,000 readers, according to CBS. Digital issues are available via Magzter and Zinio.

Separately, CBS continues to dominate TV viewing in certain age segments. The company continued its top position among viewers ages 25-54 last season (September-May) -- for the 12th time in 13 seasons. It was also neck-and-neck with NBC among viewers ages 18-49 for live program ratings plus seven days of time-shifted (L7) data.

Despite this success, in the second quarter of the year CBS saw total revenues slip 1.6% to $901 million, due to a decline in advertising sales. Concerns about declining viewing of live TV, especially among millennials, have helped drive CBS stock down, along with other big media companies; at the time of writing, shares were trading at $50.20, down from $55.54 a month ago.