What? HBO Picked Up 'Sesame Street'? How Is This Possible? 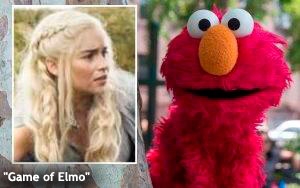 A meeting of these mismatched TV titans will never happen, unfortunately -- but a visual of Tony giving Mr. Rogers a big bear hug welcoming him into the HBO family came to mind when I first heard the news on Thursday that “Sesame Street” is moving to HBO.

Talk about a mismatch: HBO isn’t exactly known for children’s shows, even if it does have some children’s programming on its HBO Family channel. Still, few people associate HBO with children’s TV -- or for that matter, any kind of TV programming that isn’t aimed squarely at (and strictly for) adults.

So now, "Sesame Street" -- possibly the most iconic and most wholesome children’s series in the history of television -- proposes to join the network of "Game of Thrones," "Girls," "True Blood," "Deadwood," "The Sopranos," "Six Feet Under," "Oz," and "Boardwalk Empire."

Here’s a fun crossover: Maybe Big Bird can be cast as one of the two principal investigators in the third season of “True Detective” next year. Or how about Elmo joining a Friday night panel on “Real Time With Bill Maher”? Here, Elmo, you can sit here, next to Ann Coulter …

According to the joint announcement released Thursday, HBO and Sesame Workshop have agreed to set up a “partnership that will make the next five seasons of [“Sesame Street”] available on HBO and its multiplex channels [these include HBO, HBO Family etc.], HBO GO, HBO On Demand and the new internet-only SVOD service HBO NOW.”

The next sentence in the announcement provides a key reason for Sesame Workshop to link up with HBO: Money. “As a key part of the deal,” the announcement said, “Sesame will be able to produce almost twice as much new content as previous seasons” – an indication that Sesame Workshop will now have access to more money for production -- HBO’s money -- than it did with PBS as a partner.

And what about PBS, Sesame Workshop’s long-time partner in airing “Sesame Street” since 1969? According to the next sentence in the announcement, “for the first time ever, [the show will be] available free of charge to PBS and its member stations after a nine-month window.”

Ordinarily, getting a TV show nine months after it aired first someplace else would not necessarily be considered a benefit, although it’s not an uncommon time frame in the off-network syndication business. As a children’s show, “Sesame Street” may be considered a special case, since small children are not likely to care if they’re watching a repeat they may have first seen nine months previously. Or maybe they do care. Quick, somebody run outside and find me a small child who I can interview for this blog post.

Besides the fact that the environment on HBO -- no matter which platform or platforms “Sesame Street” will be offered on -- is not exactly perceived as a wholesome environment for children, the deal also seems to relegate PBS, if not “free TV” in general, to second-class citizenship behind powerful, rich pay-cable.

Or as Vulture.com’s TV columnist Josef Adalian put it in a Tweet yesterday: “For those who say, ‘The show will still air on PBS’: Syndicated reruns will air on PBS. Lower-class kids get hand-me-downs …”

Under the agreement announced this week, Sesame Workshop will produce a spinoff series featuring the “Sesame Street” Muppets, plus another new educational show for children that the announcement did not specify. HBO will have first crack at these new shows too. In addition, HBO scooped up the rights to air 150 past episodes of “Sesame Street.”

It is really quite a story: HBO, which dabbled ever-so-faintly in children’s television, making a play for kids’ TV domination by swooping in and grabbing TV’s most storied children’s program from PBS. What’s next for the content raiders of HBO -- “Downton Abbey”?