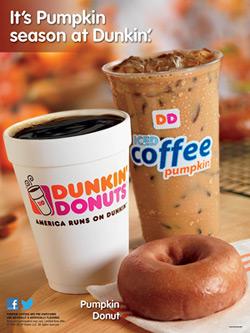 To kick off its popular pumpkin-flavored seasonal menu offerings, Dunkin' Donuts is launching a campaign spanning events and social, digital and traditional media on Aug. 17.

Dunkin' jumped on the now-massive flavor trend early on, introducing pumpkin spice donuts and pumpkin muffins in 2003. Over the years, the chain has incorporated the flavor into all of its core categories. This year's returning items include pumpkin iced coffee, hot coffee, lattes, donuts, Munchkins donut holes and muffins, plus brew-at-home K-Cup and packaged coffees available in-store and on Dunkin's site. New treats are also introduced each year during the course of the season.

"Every year, people want more and more pumpkin, and we like to think that we've created an unparalleled selection of ways to enjoy it," Lindsay Cronin, public relations manager for Dunkin’ Brands, tells Marketing Daily. "We want to keep providing guests with new and exciting reasons to return to Dunkin’ Donuts, not just for their favorite items but for something a little new and different, as well."

The demand for the pumpkin items justifies a significant marketing effort.

This week, Dunkin' is hosting "Pumpkin Peeks." At each event, the first 500 guests will be offered a free medium hot or iced pumpkin coffee, along with other pumpkin-themed giveaways.

Dunkin’ is also running a “PumpkinGrams” promotion between now and Aug. 31, in which fans who post about its pumpkin coffees and lattes on Twitter and Instagram, using #DDPumpkin and #Sweepstakes to qualify for chances to win digitally delivered Dunkin' gift cards.

In addition, the campaign includes national TV, out-of-home, radio and digital advertising, and paid media on social channels including Facebook, Twitter and Snapchat.

The pumpkin menu items are being introduced over the next two weeks, and will be available nationally by Aug. 31.