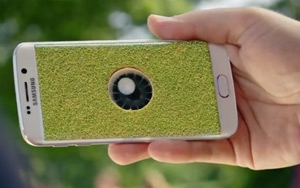 The partnership includes a new TV ad featuring top PGA golfer Paul Azinger. The ad announces the updated PGA Championship app, launched last year when the company signed the multi-year deal, where people can follow the game and stats on tablet or phone.

That includes live Marquee Group and Par-3 coverage, new 4K All-Access Video On-Demand, live scoring, player info, social discussion, and photo galleries, per the company. The PGA Championship TV App will be available for viewers prior to the start of the tournament.

On the ground at the championship, Samsung will have the Samsung Experience hub -- which, in addition to offering content on the matches, touts products like the Galaxy S 6, Gear VR and JS9500 Series Curved SUHD 4K TVs, as well as the PGA App.

There is also a focus on the new Curved SUHD TV sets that Samsung is launching, as the the Korean company is screening the game on a phalanx of the new curved TVs.

And Samsung is showing next year's PGA Championship course as part of a "Beyond Imagination" demonstration of the Galaxy Gear VR.

The experiential footprint is at the sponsorship area of the Whistling Straits course at Kohler, Wisc., near the first hole. The company also has the Wanamaker Trophy this weekend for photo ops, and a meet-and-greet with Azinger, who has won the PGA Champion, and is Ryder Cup Captain.

Last year, Samsung became official patron of the PGA of America -- a three-year partnership that includes both the PGA Championship and Ryder Cup. The deal made the immersive app and TV platform a possibility since it included multi- and second-screen potential. The program also makes Samsung devices the official scoring system of the two events.