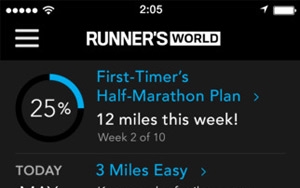 Health and fitness publisher Rodale is set to launch a series of new mobile apps that will serve users with additional functionality beyond the usual range of training apps. The first app, called Runner’s World Go, debuted this week for iOS devices, and can be downloaded for free from the Apple iTunes store.

Runner’s World Go offers a range of content suitable for runners of all skill levels, including real-time weather updates from AccuWeather, tips for what to wear, the best time to run each day, and expert training advice, along with fresh content from the Runner’s World Web site.

In addition to the free app, Runner’s World is offering a monthly paid subscription service that gives access to customized training plans designed around the user’s particular goals.

Rodale plans to roll out additional apps using the same utility-based model for its other brands over the rest of the year, including Men’s Health, Women’s Health, Prevention and Bicycling.

The new mobile apps are part of a broader push from Rodale to offer new services and raise the profile of its brands.

In June, the publisher unveiled a partnership with Chef’d, which delivers gourmet meal kits, for branded a la carte meals and meal plans. The partnership is kicking off with branded meal kits for Men’s Health, and will later extend to other Rodale brands, including Women’s Health, Prevention, Runner’s World, Bicycling and Organic Life.

Also in June, Rodale Inc. signed a deal with United Talent Agency to create scripted and unscripted programming for a variety of media platforms. Under the terms of the development deal, UTA will help Rodale create original programming around its titles.