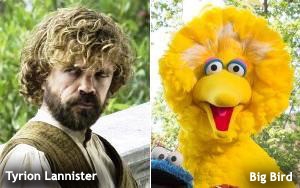 The creative juices were evidently flowing late last week as journalists on the TV beat learned of the HBO-“Sesame Street” deal and sensed an opportunity for clever wordplay.

The results of all this creativity were two similar approaches to covering the story that indicated great minds think alike. One of them played off the incongruity of a linkup between the decidedly adult pay cable channel and a TV show that might be the most iconic brand in children’s television. The other adapted the educational show’s dedication to highlighting specific numbers or letters in each episode.

Applying the latter approach, the New York Daily News story by Melissa Chan began this way: “This report is brought to you by the letters W-T-F.” -- one of the best of all the lead sentences on Friday because of how it expressed the shock felt by many when they heard HBO had grabbed “Sesame Street” from PBS.

Variety’s Brian Steinberg also used the “letter” approach cleverly in a piece analyzing the deal. “You might say ‘Sesame Street’s’ newest move is being brought to you not by a letter or number, but by a symbol: $,” he wrote to lead off the piece, in which he explained how the agreement would give “Sesame Street” producer Sesame Workshop an infusion of cash.

A headline here on MediaPost.com took up the “letter” approach for an analysis by Editor In Chief Joe Mandese that discussed the “Sesame Street”-HBO deal in the context of another big media story last week -- Google’s restructuring and establishment of an umbrella company called Alphabet. The headline on this post: “Brought To You By The Letters A Through Z, But Mostly H, B & O.”

Some of these leads and headlines were almost identical. “This deal is brought to you by the letters HBO,” wrote Deadline.com’s David Lieberman in the first sentence of his story.

“The letters of the day are H, B and O,” read the lead sentence in the New York Times story by Emily Steel on Friday morning.

On the same morning, The Wall Street Journal ran a front-page teaser (for its story on an inside page) with this headline: “ ‘Sesame Street’ is Brought To You By the Letters H, B and O.”

The lead sentence on the WSJ story played off the clash of the two cultures at the two entities. “Big Bird is heading over to HBO,” wrote reporter Joe Flint.

Other journalists adopted this approach by linking PBS or “Sesame Street” characters with HBO characters in their lead sentences. “Big Bird and Elmo, meet your rich new friend, Li’l Tyrion,” wrote the Washington Post’s Hank Stuever to start his story.

“Li’l Tyrion” is a reference to Tyrion Lannister, played by Peter Dinklage in “Game of Thrones.” Stuever may have used the word “Li’l” either as an antonym of the word “Big” in “Big Bird” or to make up a new HBO kids’ TV character called “Li’l Tyrion.” However, since Dinklage is a dwarf, the word “Li’l” was probably ill-chosen here.

My blog post used a similar lead on Friday, although the two characters “meeting” each other were not from either “Sesame Street” or “Game of Thrones.” My lead was: “Mr. Rogers, meet Tony Soprano.”

I admit that “The Sopranos” wasn’t the most current example of an HBO show to apply to this subject since “The Sopranos” ended its run eight years ago, in 2007. Still, the lead on the New York Post’s story invoked the same show, however awkwardly, in an attempt to link Tony Soprano’s involvement in the garbage-hauling industry to the Muppet known as Oscar the Grouch who lives in a trashcan on “Sesame Street.”

“If Oscar the Grouch doesn’t wanna see his precious garbage can hurt, he better have a little talk with Tony Soprano’s friends in the waste-disposal business -- now that HBO has landed a deal to broadcast ‘Sesame Street’,” read this lead by Sophia Rosenbaum. The story carried a photo of Big Bird on the left and Tony Soprano (James Gandolfini) on the right.

While many editors and reporters have no problem at all with puns and wordplay, a number of them played it straight when reporting this story. One of the driest leads was this one, on TVLine.com: “The non-profit Sesame Workshop and HBO have struck a deal through which the next five seasons of ‘Sesame Street’ will premiere on the pay cabler, HBO GO, HBO On Demand and HBO NOW.”

That lead was brought to you by the letters S-N-O-R-E.