Mobile Video Is The Future Of Mobile Advertising 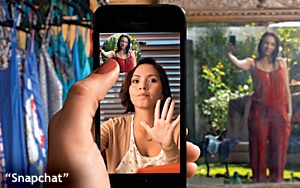 The Interactive Advertising Bureau has released a report showing that mobile advertising last year was a $31.9 billion dollar industry, growing 65%. It’s safe to say that number is only increasing in 2015.

Another report, from Business Insider Intelligence, predicts a compound revenue growth of mobile advertising at nearly 40% through 2020.

All indications suggest that video ads will become the dominant form of mobile advertising.

The wires are abuzz with the news about Snapchat, ad giant WPP and the Daily Mail partnering to start developing more vertical video ads. Snapchat reports that vertical videos have nine times the rate of completed views versus horizontal. It was a brilliant move that Snapchat embraced the format, and it’s not because of the wasted space that horizontal video has on mobile.

With all the money going into mobile, and everybody wanting to be “mobile-first,” an emphasis on vertical video could be considered a symbol of the influence that mobile now has in marketing circles.

Alia Lamborghini, SVP of sales for Millennial Media, says the shift to vertical is a big deal, noting that “what we’ve seen work less well is people taking their [traditionally horizontal] TV assets and dumping them into mobile.”

Marketers designing ads specifically for a format that only looks good on mobile is a positive sign of things to come.

Having mostly solved the “enough inventory” problem, everyone is now pushing for quality supply in programmatic, especially as reports of fraudulent ads abound.

Premium inventory is one way to counter fraudsters, though there is always a risk of fraud.

Programmatic and mobile video are both in fledgling stages right now, says Frank Sinton, CEO of video tech company Beachfront Media. “The big programmatic traders are doing audience buying, and they need data,” he says. “When it comes to programmatic, it comes to getting the right data to the advertiser and having them make the decision.”

With the volume default set to mute, auto-play video ads are a purely visual medium. Facebook reports higher interaction rates with native video ads than any other platform. Now that those ads are available to apps within the company’s Audience Network, the potential for them has grown immensely.

However, the social giant has faced some criticism: On one hand, it doesn’t use third-party verification for its metrics, and on the other, they count three seconds of video without audio as a view. “Maybe [consumers] just can’t scroll faster,” jokes Sinton.

Carolyn Everson, Facebook’s VP of global marketing solutions, told Beet.tv that auto-play on mobile is “Harry Potter-esque: where the pictures come to life, and you don’t even have to click to play them.”