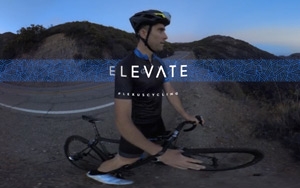 Lexus has launched a 360-degree film experience called “Lexus Elevate” for Samsung Gear VR and Samsung Galaxy S6. The film is a short documentary feature about pro cyclist Christian Vande Velde taken entirely from a helmet cams. The immersive film, by Lexus' agency Team One with an assist from production studio UNIT9, works on all Android devices, using Google Cardboard. A 3:21 version of the film is also on YouTube.

The film shows a 360-degree view of Vande riding mountain roads as he narrates his life story, his training, what drives him, his sacrifices for the sport, and why he loves riding. The film aligns with the the automaker’s sponsorship of the U.S. Pro Cycling Challenge in Colorado this week. Lexus will have a presence there at the Lexus Finish Festivals where it will feature the 3:21 minute film, as well.

Lexus' sponsorship of the race and its activation is part of a larger lifestyle program. In April Lexus returned as sponsor of the Bottega Gran Fondo in Napa Valley. Last year Lexus also took over sponsorship of the U.S. Pro Cycling Challenge from Nissan, which had been automotive partner for three years. Last year Lexus, which also sponsors the USGA, the U.S. Open and other golf events, had crews and over 100 vehicles as support cars.

The pro cycle fan target is valuable, as indicated by the fact that people who are into pro cycling are also likely to be riders, amateur or otherwise, and spend a lot of money on their bicycles, which can go from $1,000 north of $10,000, for pros and wannabes.

Pro cycling fans are affluent, according to data from Velonews, Bicycle Business Journal, and the Bicycle Manufacturers Association. Pro cycling fans have medium income of $80,000, average of 38 years of age, and 90% have gone to college. About half own a truck or SUV.