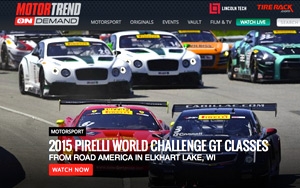 Gearheads of the world have a new video platform to feed their automotive obsessions, courtesy of Motor Trend,which announced the official launch of its new OnDemand subscription video service on Monday.

The subscription video on demand service is also the exclusive distributor in North America for over 60 live events, including racing from Pirelli World Challenge, MotoAmerica, the Blancpain Series and Lamborghini Super Trofeo, among others, as well as popular enthusiast events, such as the Pebble Beach Concours d'Elegance.

The subscription service is currently available for desktops and tablet devices; it will introduce mobile apps in the near future. It will also be available via digital video devices, such as Apple TV, Roku, and Sony PlayStation.

There are three price tiers for the service: $6.99 for one month, $79.95 for one year, and $129.95 for two years. The one-year and two-year subs also include a free print sub from among a selection of TEN’s auto enthusiast brands.

TEN has been working steadily to expand its video offerings. Back in April, it acquired Torque.TV, an online media company that provides motorsports and automotive enthusiast programming for the Motor Trend OnDemand service.