At Walmart And Home Depot, Sales Stronger Than Expected 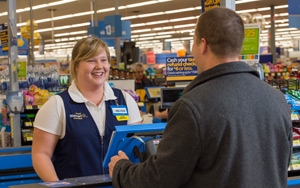 Both Wal-Mart Corp. and the Home Depot say Americans are shopping harder, and the retailers are posting stronger-than-expected sales gains for the quarter. While Home Depot is so encouraged it raised its financial forecasts for the year, Wal-Mart cut its outlook, as higher wage costs and a pinched pharmacy business lowered its profits well below expectations.

At Walmart U.S., total net sales for the second quarter climbed 4.8% to $74 billion, driven by a 1.5% comparable-store sales bump, marking its fourth consecutive quarter of positive numbers. But as it increased staff hours at stores to improve customer experience, the pressure of higher wages hurt its profits, with bottom-line numbers coming in well below expectations. In the U.S., operating income fell 8.2% to $4.8 billion.

It warned that those pressures would likely continue and as a result, cut its financial forecasts for the remainder of the year. “We are committed to improving the customer experience and we will protect the investments necessary to achieve this goal,” says Greg Foran, president and CEO of Walmart U.S., in remarks prepared for its conference call. “We believe traffic and comp sales increases for Walmart U.S. show we are on the right track with our investments.”

Those efforts include its “Checkout Promise” initiative, which aims to keep more registers open during busy periods, and stores that are cleaner and better organized.

While all formats generated positive sales results, it says sales in its more than 350 Neighborhood Markets were up an impressive 7.3%. But based on what it has learned from the location and size of those stores, it is cutting back on planned expansion, and now expects to open between 160 to 170 this year, rather than the 180 to 200 that had been initially forecast.

In online efforts, it says its five-market test of online grocery ordering is doing well -- especially with moms -- and that it is expanding to offer more remote pick-up sites, such as corporate campuses. And in a swipe at Amazon, the company says it is testing a program with unlimited free shipping, priced at $50 a year. (Currently, Amazon Prime costs $99 a year.)

“We saw balanced growth across our business resulting from strength in the core of the store as well as the continued recovery of the U.S. housing market,” says Craig Menear, chairman, CEO and president, in its earnings announcement. It raised its forecast, and now predicts that comparable-store sales will grow somewhere between 4.1 and 4.9%.