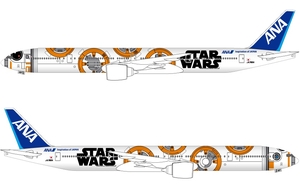 All Nippon Airways (ANA), Japan’s largest airline, is planning three “Star Wars”-themed planes, the first two which will take to the skies this fall.

The planes will be decorated with original “Star Wars” character R2-D2, along with BB-8, a new character from “Star Wars: The Force Awakens” which will be in movie theaters in December.

As part of an agreement with The Walt Disney Company, the first of the three planes will go into service on Oct. 18.

Through the partnership ANA hopes to welcome more passengers of all ages to journey through the sky, an airline spokesperson says.

R2-D2 alone will be featured on the first plane to launch, a Boeing 787-9 Dreamliner scheduled to go into service on international routes, initially as flight NH116 between Tokyo and Vancouver, and then fly between Japan and other cities in ANA’s international network including the U.S. (Seattle and San Jose), Europe (Munich, Paris and Brussels), Australia (Sydney), China (Beijing), and Indonesia (Jakarta).

“We at Lucasfilm are absolutely delighted to have found in Japan such a wonderful partner in ANA and to able to provide you with a wonderful opportunity like this one,” says Kathleen Kennedy, president, Lucasfilm Ltd, in a release.“I, too, certainly look forward to flying aboard one of ANA’s Star Wars jets on my next trip to Japan.”