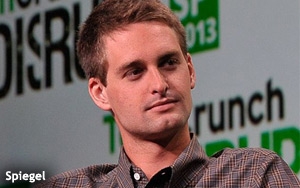 From a purely financial perspective, Snapchat didn’t exactly clean up in 2014. Rather, the messaging startup lost $128 million on about $3 million in revenue, according to documents obtained by Gawker.

Not starving for cash, however, the company that popularized disappearing messages appears to have stockpiled roughly $320 million.

The company reportedly expects to take in $50 million in revenue this year and upwards of $200 million next year. Recently reported by Re/code, the projections would secure Snapchat’s position as a top social network in terms of popularity and earning power.

The company claims to have 100 million users who watch 2 billion videos per day, suggesting it could be a serious rival to YouTube and Facebook.

Snapchat reportedly charges around two cents per view on 10-second ads. That equates to about $400,000 worth of ad space for stories generating 20 million views. Despite its success, however, Snapchat recently suffered a setback with the departures of former COO Emily White and former VP of partnerships Mike Randall.

In their absence, the company has reportedly struggled to find its footing with agency partners.

In the agency world, Snapchat has as many fans as critics. Gary Vaynerchuk, co-founder and CEO of VaynerMedia, recently said how much he admires Snapchat’s CEO Evan Spiegel for adapting to market demands.

“Evan Spiegel is doing something that everyone in business should learn to do: Be unromantic about how you make your money,” Vaynerchuk recently told Social Media & Marketing Daily.

Rather than requiring users to press and hold their screens to view content, Snapchat recently began letting them simply tap to view Snaps and Stories. Among other improvements, Snapchat also recently rolled out two-factor authentication to improve Snapchat security. Once users enable it, “bad guys” will have a much harder time if they try to hack into your account, it promises.