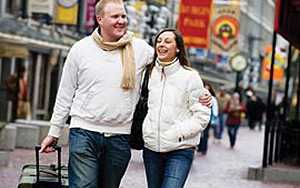 The company tracked user engagement across 177.7 million mobile impressions using a predictive modeling platform with a focus on the travel and tourism vertical.

For example, one segment is single women with no children who make over $225,000 a year and enjoy foreign travel and have been on a cruise in the last three years. This segment, while hyperspecific, had a 200% higher engagement than the industry average.

Consumers spent an average of 21.01 seconds interacting with the rich media units, which was 59% higher, it claims, than the industry benchmark. Iacovone attributes the high engagement levels is due to the accuracy of the microsegments generated by the platform.

Users on Wifi networks were 40% more engaged with ads compared to users on cellular networks.

The states that performed best in the report included Minnesota, Texas, Kansas, North Dakota and South Dakota, three of which are fairly sparsely populated.

The top device for ad engagement was the Kindle Fire.

eMarketer expects that mobile will make up half of the $4.85 billion digital ad spend in the travel industry in 2015. eMarketer also estimates that programmatic now accounts for 68% of U.S. digital display ad spending by travel marketers.