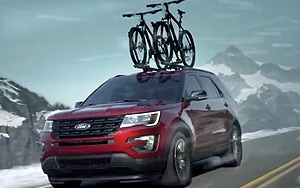 “Built Ford Tough” is Ford’s umbrella theme for its F-Series trucks. Now the Dearborn, Mich. automaker will have one for its SUVs and crossovers: “Be Unstoppable.” It might look familiar because the line launched as the campaign mantra for the 2015 Ford Edge. Now, starting with campaign for the 2016 Explorer SUV, for which the first ad launches this week, the campaign is extending to the rest of the SUVs, including Escape and Expedition.

A new Explorer ad, shot entirely in Washington State, shows the vehicle driving through the rainforest, over a perilous mountain pass, and over a sere desert terrain. The voiceover says “Mother Nature can turn in an instant. Don’t turn back.” What the ad has in common with the Edge work, and with all of the other SUV work to come, is straight-down aerial perspective (in this case Ford used a drone to shoot high-altitude footage looking straight down on the Explorer as it cruises the rainforest twisties, and a focus on people experiencing the ride. For the Edge, which Ford is marketing to urbanites, the landscape has been urban San Francisco. Another common thread: all of the SUV work going forward will feature Rachel Platten’s “Fight Song” as backing track.

Travis Calhoun, Ford's communications manager for trucks and utilities, explains to Marketing Daily that the creative approach for the segment is deliberately emotional, with as much focus on people in the vehicles as on the vehicles. “It's an emotional sense of being unstoppable, of confidence and optimism.” He says an upcoming spot will show the vehicle in a less rugged adventure, but with the same creative idea. “One version starts with a family going on a road trip; so these experiences don't have to begin and end in the outdoors.”

The Explorer work also puts a strong focus on the Explorer’s three-row seating, and features the three trim levels now offered for the nameplate -- one of them, the Platinum series, a new luxury trim with the 2016 model. Also featured is the 360 horsepower Sport version, and the Limited trim.

The digital work gets into specific features, also the case with Edge, whose online video content stars comedian (and “notorious parking failure”) Greg Hess and Ford engineer Johanna Slanga, who demonstrate on San Francisco's steep hills such things as Edge's parking assist auto-parking technology. Calhoun says there will be similar executions for Explorer, though probably not with Hess and Slanga. “As we move into the funnel we will tell more product-featured stories. it won't be same content as with Edge, but, as with Edge we will move into videos that communicate product attributes.” Also coming out soon is more work for Escape also shot in the Pacific Northwest, with the city being Seattle this time around.