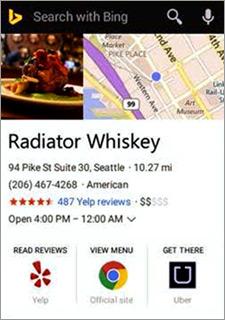 Microsoft Bing released Snapshots on Tap for its Android search app that analyzes the content on the smartphone screen, in any app, and serves up relevant information as an overlay.

The additional information augments the content on the page without making the user leave their favorite app or page. Let's say someone reads a story about a local restaurant -- the user can long-press the home button and have Bing bring up reviews and information such as the phone number to make a reservation. Or when in Facebook friend posts information about a vacation in Hawaii, long-press the home button and Bing reads the contents of the screen, identify the destination and presents information from across the Web.

Microsoft seems to have become a little quicker to release features these days, since it gave its display business to Verizon's AOL division to focus on search marketing and advertising. The integration works similar to what users can expect of Google Now on Tap, which the Mountain View, Calif., company plans to release with the operating system Android Marshmallow this fall.

Bing has more than 1 billion entities of people, places, and things, with more than 21 billion associated facts, 18 billion links to key actions and more than 5 billion relationships between entities. The data is available in bing.com, Cortana, Xbox, Office and other services.

An application program interface (API) makes it possible. Microsoft will make the Bing knowledge and action graph API available to the first set of developers in the fall.