The audiences watching TV and digital video are (mostly) the same, so why not use the same data to reach them in both places?

That’s exactly what more and more marketers are doing.

According to programmatic video ad platform Videology, digital video advertisers used nearly twice as much TV data during Q2 2015 compared to Q1 2015. The number of digital video campaigns that used TV data targeting segments was 91% higher in Q2 compared to Q1, per Videology.

A total of 15% of all digital video ad impressions were bought using TV data sets, per Videology. That’s an increase of 64% over Q1 2015.

"With so much cross-screen data now at advertisers' fingertips, the planning siloes between TV and digital video campaigns are truly coming down.” stated Scott Ferber, Videology’s chairman and CEO.

In a similar vein, Videology reveals that mobile video programmatic buying has skyrocketed over the past year. The company notes in its Q2 2015 U.S. Video Marketing report -- which is where all of this data comes from -- that there were more than 10 times the amount of mobile video impressions available for programmatic buying in Q2 2015 compared to Q2 2014. 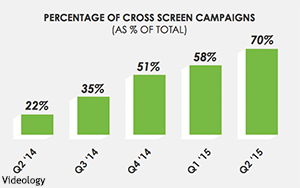 In short, the data shows that while mobile is growing, it’s growing as part of a larger cross-device movement. The data reveals that nearly three-quarters (74%) of the campaigns run through Videology’s platform during Q2 2015 included mobile.

Additionally, Videology found that marketers are putting a higher emphasis on viewability. The report notes that 31% of campaigns managed in Q2 2015 were “specifically optimized for viewability -- a 165% increase over the same period last year.”

This post was previously published in a recent RTBlog