Ralph Lauren First Out Of Gate With Luxury Smart Shirt 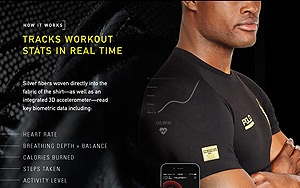 For all the posturing that’s gone on surrounding wearable technology in recent years, there’s an unlikely front runner: Ralph Lauren is about to put its sexy black PoloTech on sale for $295, ready to transmit your every workout move straight to your iPhone.

While other companies, including Adidas, Athos and Victoria’s Secret, already market products using similar technology, the PoloTech is the first luxury fashion brand to enter the space, proving that technology doesn’t have to look dorky.

For more than a decade, tech and athletic companies have been tinkering with wearables that target “elite, and even professional, athletes,” says Angela McIntyre, research director at Gartner, who follows wearables and connected apparel. “What I get excited about is fashion-forward companies like Lauren even acknowledging that smart garments can move away from the more serious fitness buff to everybody, and into mainstream fashion.”

Ralph Lauren first showed off the shirts last fall, decking ball boys at the U.S. Open out in prototypes. But the shirt’s introduction now is strategic, and the company is calling it the “halo product” of its first collection of the Polo Sport brand, with an athletic focus.

Fibers woven into the fabric track heart rate and variability, breathing depth and recovery, energy output and stress levels, as well as number of steps taken and calories burned. An accelerometer captures the intensity of movement, based on G-force measurements. All that gets transmitted to a small and unobtrusive “black box” on the front of the shirt, then to an app on the wearer’s iPhone, iWatch or iPod Touch. (The app also includes variable workouts for strength, cardio and agility.) The black box slips out easily, so the shirt can get tossed in the washing machine.

McIntyre tells Marketing Daily that as companies continue to ramp up such products, she expects the category to begin to grow in earnest by 2017, and by 2020, thinks there may be as many as 50 million garments sold per year. Estimating the value of the market, however, is difficult. “Right now, these products are priced all over the map, but prices will come down as volume goes up.”

And while companies with an eye on the fitness market represent one approach to wearables, medical grade wearables are also a category many are exploring right now. “But marketing those types of garments is very different,” she says. “Do you target doctors? Hospitals? Consumers? And who’ll pay for them?”

But the bigger trend, she says, is that between fitness trackers and wristband devices, including the iWatch, “people seem to be getting more used to the idea of monitoring their heart rate. So they’re open to more kinds of technology.”

One wrinkle in connected apparel is a lawsuit filed earlier this year by Sarvint Technologies, which has yet to get its own smart shirt on the market. That suit names Ralph Lauren and Adidas, among others, claiming patent infringement.

iot, mobile
1 comment about "Ralph Lauren First Out Of Gate With Luxury Smart Shirt".
Check to receive email when comments are posted.
Next story loading