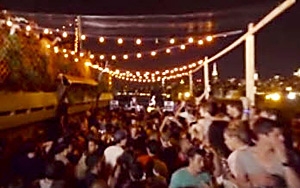 Absolut Vodka reports strong response to its first virtual reality experience, in which it live-streamed a Bob Moses concert.

Absolut used a 360-degree drone and multiple GoPro camera rigs to film a rooftop performance by the Bob Moses music duo in Brooklyn, N.Y. on July 31. Anyone who downloaded an Absolut Reality app on his or her smartphone, and had Wi-Fi access, could watch, with or without using a Google Cardboard headset.

The brand also produced a 360-degree teaser trailer, and a four-minute video of highlights from concert, both posted on YouTube and promoted on the brand's social media.

Absolut reports that the average view time for the live experience was more than 17 minutes — exceptional for streaming content — and that demand for the Cardboard headsets was three times the 5,000 that were available.

The recap video, which was also shared on the band's Facebook page and promoted via targeted and "dark" posts on Facebook, has generated some 3,000 YouTube views to date.

The VR experience was the first beta project from Absolut Labs.  Absolut brand director Afdhel Aziz describes Labs as "an experimental and creative venture dedicated to reimagining and transforming the future of nightlife" by "developing new products and experiences that live at the intersection of art, music, technology and design."

On the Track With Junior 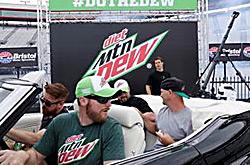 The video will be shown at the night race at Bristol on Aug. 22. It's also viewable on YouTube 360, and available in the Milk VR marketplace, for those who have the Samsung Gear VR headset.

In March, Earnhardt unveiled a new Mountain Dew Baja Blast paint scheme on his No. 88 car. The sponsorship relationship between Mountain Dew and the driver began in 2008.