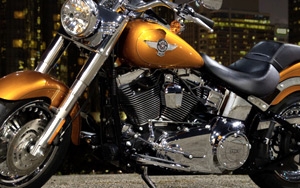 Harley-Davidson went mobile in more ways than one last weekend. On Sunday, the motorcycle maker used Twitter's Periscope live-streaming application, which launched in March, to stream a global product reveal delivered as a ride around the world. The ride showed off two new Dark Custom bikes, and what the motorcycle maker is characterizing as the most powerful cruiser lineup in its history.

Live streamed over 30 minutes (@harleydavidson in the Periscope app), the ride revealed the Iron 883, Forty-Eight, Harley-Davidson Street 750, Softail Slim S and Fat Boy S motorcycles. The actual U.S. reveal was in Portland, Ore., which was where the first leg of the global "ride" began with people cruising in the city and surrounding mountains. From there the digital experience went to Sydney, Australia; Tokyo; Barcelona; Toronto; Mexico City; Las Vegas, and then back to Portland. Besides hosting it on Periscope, Harley-Davidson is also archiving recap footage on its YouTube channel.

Periscope is a mobile-device social app, wherein a live stream only stays up for around for 24 hours and content gets promulgated through social sharing. For brands, that means the ability to promote content as real-time, authentic and maybe a little exclusive. That, and the sharing vector, works for Harley-Davidson because of its cachet around owners as a community. Other brands that have used it include Nissan, which used it at the New York auto show this year to stream the reveal of the Maxima sedan. GE has also used it as a platform for its ongoing drone-view explorations of its people and facilities, and effort to show people what the company makes and who makes it. Taco Bell and Target are brands that have used it to reveal new lines of products.

The new Iron 883 and Forty-Eight Dark Customs follow the sub-brand's retro aesthetic and add a new suspension package and mag wheels and better seating setup to get more "smooth" in the ride. Harley also revealed the Road Glide Ultra under its Project Rushmore banner.

Harley has been marketing aggressively this year. This spring the company launched one of its biggest campaigns, “Roll Your Own,” all about real riders and what they do on their rides with a social component at #RollYourOwn. It included a TV buy on NCAA Men’s Basketball Tournament. It has also been touting its new, smaller bikes to a new generation of riders and prospects on FX, MTV, and Adult Swim, and as part of its relationship with UFC.

And the company this year got motorcycle dirt-track racing on the ESPN X-Games roster. The motorcycle maker also had product in “Avengers, Age of Ultron” this year, via a relationship with Marvel.