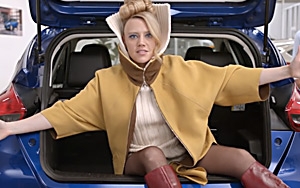 Auto companies are driving digital spend this year, with Ford in the lead. The six leading auto companies by volume have increased their online advertising activities since January, according to MediaRadar, a New York-based advertising sales consultancy.

Ford Motor bought ads on 97% more Web sites from January through Aug. 21 this year than during the same period in 2014. That amounts to a larger percentage increase than any of the other auto companies the firm studied. In print, Ford is also spending more.

MediaRadar founder and CEO Todd Krizelman tells Marketing Daily that automakers are doing more so-called native advertising and content. And when it comes to using programmatic buys to do that, it might more accurately be called “native lite,” where advertising fits the publisher’s content without involving the publisher's content team. “We have found that there are attempts to do native programmatic, where it looks like it fits the content feed of a website, but it's not custom content and sponsored editorial. So, I know for sure the native content  numbers are on the increase on auto and broad market also. But it's not coming at the expense of programmatic.

MediaRadar, which pulls from its own database of ad sales intelligence -- in this case generated from several thousand sites and print titles -- reports that Ford increased its print ad budget 26% year-to-date. General Motors increased its print budget by 3%, while four of the six companies MediaRadar tracks actually cut their print-ad buys versus last year: FCA is off 7%; Nissan by 9%; Honda is down 18% on print budget; and Toyota Motor cut print ad spend by 37% through Aug. 21 versus the period last year.