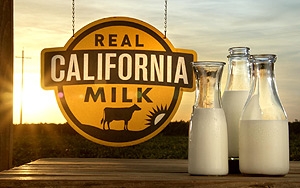 For more than 15 years, the California Milk Advisory Board (CMAB) and its agency Deutsch have touted that "Great milk comes from happy cows. And happy cows come from California" in a long-running campaign to encourage dairy consumption.

But this message doesn't resonate in today's farm-to-table culture. Instead, CMAB and Deutsch are switching from cows to artisan with "Return to Real," a new initiative that focuses on the farmers.

"People are moving away from overly processed foods and getting back to the use of wholesome, real foods, and they want to know where their food comes from. Dairy and the farmers who produce it are at the heart of that movement," says Jeff Bossin, SVP, creative director at Deutsch.

Using real California dairy farmers, the campaign includes four TV spots, an interactive long-form online video, digital banners and a robust social strategy. The spots capture the "romance" of food by using a phantom camera and focuses on different products made from milk -- cheese, yogurt and butter -- that are represented by the Real California Milk seal.  See the ads here, here, here and here.

"The organization did a lot of research and uncovered an insight that most moms don’t want to give their families overly processed foods, which helped drive the direction of campaign," says Bossin.

Shifting the focus from cows to farmers did provide one welcome perk: humans are much easier to work with than animals.

"The team spent a lot of time traveling to each location to film the farmers on their farms," says Bossin. "We could have never captured the natural beauty of the farm with the cows, sunset, the carafes of milk and the endless fields on a stage. The farmers were very kind, humble and patient and it was an absolute pleasure to work with them."

The CMAB's national advertising budget is around $20 million annually. CMAB was one of the agency’s first clients when it opened its LA location and has been with Deutsch for more than 15 years.