For Fashion Week, Saks and 'Empire' Makes A Chic Entrance 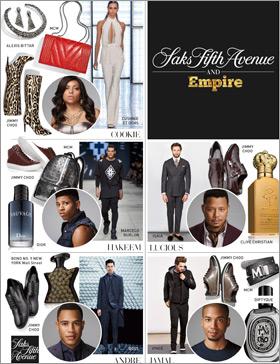 Saks Fifth Avenue is hooking up with the red-hot “Empire” and introducing a series of branded collections. And along with scene-setting store windows, it’s all scheduled to debut just in time for the series’ premiere, as well as Fashion Week.

The luxury retailer says its exclusive deal with Fox’s record-breaking (and glamour-oozing) drama includes curated collections inspired by the likes of Cookie and Lucious. Among them: Fine jewelry from Alexis Bittar, ready-to-wear for women from Cushnie et Ochs, shoes for both men and women from Jimmy Choo, and handbags and accessories from MCM. And actor Trai Byers, who plays Andre, appears on the cover of Saks’ beefy fall magalog. The “Empire” items are set to be sold in stores, online on both brand’s websites, and at stand-alone locations.

And “Empire”-themed windows are scheduled to debut at both the New York City flagship and Beverly Hills store Sept. 10 through Oct. 7. (New York’s Mercedes-Benz Fashion Week kicks off on Sept. 10, too.) A Saks spokesperson says it ads promoting the “Empire” are slated for the Wall Street Journal and Crain’s Chicago Business.

The retailer also intends to host men’s luxury made-to-measure suiting events tied to the partnership at stores around the country, including Chicago, Boston, Houston, Atlanta, Bal Harbour, and San Francisco

The first episode of the new season is set to air Sept. 23. “The lines between fashion and entertainment are intersecting,” says Saks’ president Marc Metrick, in the announcement. “Harnessing this moment is a key underpinning to our strategy as it brings energy and uniqueness to the shopping experience at Saks.”

Separately, Saks just opened a permanent Manola Blahnik boutique in its 10022-Shoe salon. And while Manolas are found in plenty of luxury locations—including its own store in New York—this marks the first time the brand is available at Saks.

In its most recent quarterly results, Hudson’s Bay Co. says same-store sales at Saks increased 0.6%, compared the same period a year ago.