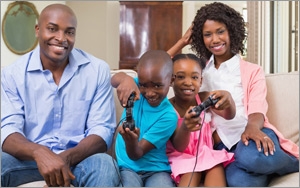 The image of the gamer as a young man sitting in his basement in front of a television set and console all by himself is so outdated, even those who play games on a regular basis don’t consider it valid any more.

“There’s always been a lot of diversity among gamers,” Bryant Harland, technology analyst at Mintel (which just released new research on gamer profiles), tells Marketing Daily. “But there’s still this idea of what a gamer is like or should be.”

For instance, most people who play games these days are doing so on their phones (39%) or tablets (29%). According to Mintel’s research, nearly half (47%) of all Americans play games on their mobile devices, as opposed to only a third (36%) who play on gaming consoles.

This changing nature of video games has led more consumers to play games on a regular basis (67% of adults play games in some form or another), though few of them relate to the term “gamer.” Only one third of men and women 35-54 (and only 41% of all women) consider themselves “gamers.” (Seventy percent of men 18-34, however, do identify with the term.)

“Even people who are avid gamers don’t want to play one game for a straight three hours,” Harland says. “It means individual games can’t ask too much of [gamers’] time because they’re spread across multiple platforms and games.”

The broad expansion of gaming among U.S. consumers has also expanded parental acceptance of gaming as a social activity. According to the research, 62% Americans in households with five or more people, play games to to enjoy the social elements of gaming (compared with 51% of the general population). And though 55% of parents admit being concerned with the graphic content of some video games, 32% of parents with children at home agreed with the idea that video gaming was a good way to connect with family and friends.

“The video game market is poised for growth, especially as kids and teens, the most avid gaming population, age into adulthood,” Harland says. “Brands that accept the challenge of meeting the diverse needs of consumers, such as concerns around price points and graphic content, will be in a good position to advance engagement among U.S. consumers.”

mobile
1 comment about "'Gamers' Cut A Broad Swath".
Check to receive email when comments are posted.
Next story loading