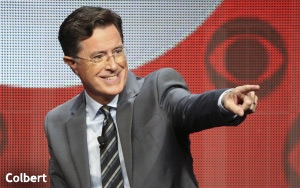 The problem with that is: “Interesting” is not always synonymous with “entertaining.” Guests who you think will be interesting often turn out not to be. Then what are you going to do?

On Monday, CBS released the guest list for Colbert’s first week of shows as host of the new post-Letterman “Late Show,” premiering Sept. 8 (the day after Labor Day).

Two guest names stood out from the rest: electric car impresario Elon Musk on Wednesday (Sept. 9) and Uber CEO Travis Kalanick on Thursday (Sept. 10). What’s going on here? Is Colbert adopting a transportation theme for his first week of shows?

If that’s the case, this particular theme appears to begin and end with these two icons of auto-mobility. Musk, the Tesla Motors maven, is listed as Wednesday’s second guest -- after Scarlett Johansson. Kalanick is listed as the first and only guest on Thursday (other than musical guest Toby Keith).

The week’s other guests are: On Monday, George Clooney, Jeb Bush and “a musical performance from Jon Batiste,” who happens to be the new “Late Show” bandleader; on Tuesday (in addition to ScarJo and Musk), musical guest Kendrick Lamar; on Thursday, Kalanick and Keith; and on Friday, Amy Schumer, Stephen King and as musical guest, a band called Troubled Waters.

This “band” is described online as an “unknown Paul Simon tribute band,” but some are already suspecting it’s some kind of basis for a comedic performance by Colbert or a surprise appearance by Simon himself -- or a combination of both.

The guest list announcement specified that at least two of the musical guests would also be interviewed before they perform --  Kendrick Lamar and Troubled Waters (whoever this “band” turns out to be). No interview is specified for Toby Keith, for some reason.

This too is a novel idea not often attempted on the late-night shows -- an interview with a musical guest preceding a performance. It’s not completely unheard of, but it is rare. Scheduling two of them in the same week indicates that the Colbert “Late Show” intends to do this more or less regularly. Oy.

The interviews with musical guests and other various “interesting” types not drawn from the usual show business pool would seem to indicate that Colbert possesses a great deal of confidence in his interviewing abilities. He talked about guest interviews when he faced journalists earlier this month at the annual summer TV Press Tour in L.A.

“Well, I’m a comedian,” he said, “but I have to say that my favorite thing on [“The Colbert Report”] became doing the interviews because I got into comedy … through improvisation. … When you’re interviewing people, you don’t know what’s going to happen. That’s much closer to how I learned my craft. And you can have big stars or important politicians or impressive thinkers, but it’s sometimes the people you don’t expect to impress you who can be your best guests.”

That might be true on occasion, in Colbert’s personal experience. But his expectation that people “you don’t expect to impress you” can turn out to be “your best guests” seems like an acute case of wishful thinking. In actual fact, such “surprises” are few and far between.

“I’m very interested in my guests,” Colbert said. “And I’m looking forward to being able to be sincerely interested in what they have to say without regard to having to translate it through an idiot’s mouth [he was referring here to the buffoonish “Stephen Colbert” character he played on his old show]. So if that leads to some serious conversations, I’d be very happy. We had them before on the last show, and the audience came with us. So I don’t see any reason why it should stop.”

Serious conversations? On a late-night comedy show? While many casual observers of late-night TV bemoan the lack of “serious” or “intelligent” conversations on the shows, experience shows that successful late-night shows -- particularly in the current TV era -- are decidedly unserious, and for the most part, unintelligent.

That’s not a criticism -- just a fact. Jay Leno and David Letterman used to talk about this dynamic every once in a while when they were interviewed about their roles as late-night hosts. Both used to say the goal of every interview segment -- no matter who the interview subject was -- was to wring comedy from the conversation. It didn’t always work, of course -- but to them, the guests served no purpose other than to entertain.

Can Stephen Colbert usher in a new era of intelligent conversation in the context of a late-night comedy show? As Jerry Seinfeld used to say occasionally on “Seinfeld,” in a sarcastic tone: Good luck with all that.