AMC Has Nothing To 'Fear,' Spin-Off Sets Record 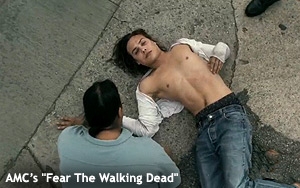 Looking for new summer TV success? Make another stop at AMC Network with another spinoff of an already top-rated series on Sunday night. “Fear The Walking Dead” -- a “prequel” of the highly rated Walking Dead series -- launched on Sunday with a massive Nielsen 10.1 million viewers and 6.3 million 18-49 viewers, and has become the highest-rated cable TV series premiere ever.

Broadcast TV networks couldn’t match whatever “Fear The Walking Dead” had working for it.

Next-highest on broadcast among 18-49 viewers was a Fox pre-season NFL game pulling in 1.7/6, averaging around 5.5 million overall viewers.

ABC earned a 1.3/4 and 4.20 million overall viewers for “Bachelor in Paradise” -- its best result. NBC was in all repeats on the night with “Hollywood Game Night” and “American Ninja Warrior” earning an average 0.7/2.