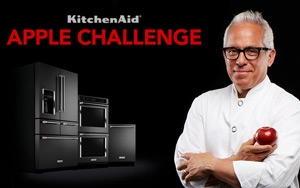 KitchenAid has a large and growing social media footprint, with Facebook, Twitter and Instagram as its key platforms. And while the brand has worked with bloggers in the past to engage their communities in culinary challenges, KitchenAid wanted to do something bigger and more attention-grabbing with its latest effort. This month the appliance brand is working with its agency DigitasLBi and the Food Network for the KitchenAid Apple Challenge featuring Iron Chef Geoffrey Zakarian.

The contest invites aspiring cooks to create an original recipe using an apple as the primary ingredient. Entrants submit a photo and description of the recipe using #KitchenAidContest on Twitter or Instagram, or upload it at the challenge’s dedicated site, through September 14.

Four semifinalists will fly to New York City to compete in a cook-off judged by Chef Zakarian based on the recipe's creativity, appetite appeal and presentation. One grand prize winner will receive a brand-new suite of black stainless appliances from KitchenAid worth $10,000, a private cooking lesson with Zakarian, and an opportunity to have that winning apple-based recipe featured in Food Network Magazine.

There are several reasons why this initiative is designed around apples, say agency executives. First, an apple has "universal appeal, character, intrigue and can be sweet or savory." Second, it can be a great ingredient for creativity. "Cooks know the versatility of something like a potato but they might not realize the versatility of an apple," they say. Third, it’s fairly issue-free in terms of seasonality, allergies, and lifestyle. Finally, in terms of brand cues, the color and shape of a red apple nods to the KitchenAid red medallion, the finishing touch on all of its new major appliances, which was inspired by the hub on its stand mixer. Also, the color red nods to the KitchenAid logo.

This is the first time KitchenAid has worked with a media partner to include a hashtag as a point of entry into a contest. Digitas has been working with KitchenAid for more than a decade.