Save Water, Shower To A Short Song 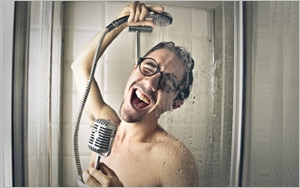 To combat the ongoing drought in its home state, the Metropolitan Water District of Southern California has teamed with Internet music streaming site Pandora to develop a playlist of short songs to shower by. The “Water Lover’s Station” (which is available anywhere) consists of water-themed songs of about five minutes in length as an encouragement to keep showers short.

“We wanted to make sure we were bringing our message to all audiences in the Southern California region, especially on digital platforms,” Sherita Coffelt, a representative for the district, tells Marketing Daily. “We realized that water use is a lifestyle decision, and so is listening to the radio. We were looking to connect them.”

The 100-song-plus compilation includes tracks such as TLC’s “Waterfalls,” Adele’s “Set Fire to the Rain,” Simon & Garfunkel’s “Bridge Over Troubled Water,” and Creedence Clearwater Revival’s “Have you ever seen the rain?” The songs were chosen by members of the Water District and its advertising agency, Coffelt says, although some popular ideas didn’t make the cut.

“It was really a fun exercise to come up with the songs on the playlist,” she says, though some popular choices didn’t make the cut. “We couldn’t use [Guns & Roses’] ‘November Rain’ because it’s too long. But if a song went over 5 minutes by 10 or 15 seconds, we kept it.”

The district is promoting the station through paid ads on Pandora, through public relations efforts and through its social media channels. Pandora also worked with the district to make the playlist searchable, which is not normally a feature of sponsored playlists, Coffelt says.

“They allowed us to make it searchable so that more people could find it,” she says. “This is just one part of an overarching strategy to keep water conservation top-of-mind.”