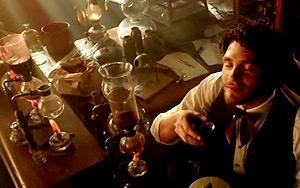 To mark its 120th anniversary, Italian coffee brand Lavazza is running its most extensive international campaign to date, including investing $20 million in its first television and branding effort in the U.S.

“Lavazza, There’s More to Taste” tells the story of founder Luigi Lavazza being inspired by his father's philosophy — "In life, there's always more to taste" — to explore coffees around the world and "create the art of coffee blending."

The  English-language version of the TV spot has 60- and 30-second formats. The longer format is hosted on YouTube and featured on a U.S. campaign site.

Developed by Y&R Italia, the ad was directed by award-winning French director Jean-Pierre Jeunet (“Amélie”). It's narrated by Italian actor Sergio Castellitto, who makes an appearance as he introduces the Lavazza story.

The ad began airing in the U.S. on Aug. 24. It will continue to run through year-end in early-morning and late-night slots on local network outlets and cable (Bravo, CNBC, CNN, Discovery, ESPN, Food Network and HGTV, among others) in the New York, Chicago, Miami and San Francisco markets.

A 30-second pre-roll and accompanying banners will run on FoodandWine.com, TravelandLeisure.com and RealSimple.com, among other sites. Videos and social media are also in the mix.

Lavazza is the official coffee of this year's U.S. Open, and is supporting that sponsorship with ads in transit hubs and other out-of-home locations. In addition, the brand will sponsor the Guggenheim Museum's upcoming Alberto Burri exhibition, running from Oct. 9, 2015, through Jan. 16, 2016.

The brand, which entered the U.S. — the world's largest coffee market — two years ago, competes in the roast and ground, single-serve and away-from-home segments in the U.S. and Canada.  With six varieties now introduced in U.S. supermarkets, the timing was right for the new campaign, reports a spokesperson.

Founded in Turin in 1895, Lavazza has a market share of 47% in Italy, operates in more than 90 countries through associated companies and distributors, and is the world's seventh-largest coffee roaster, according to the company.