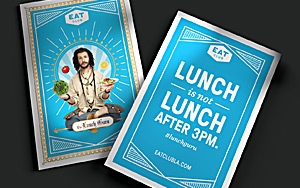 Since its launch five years ago, the start-up company Eat Club has pivoted from delivering individual restaurant meals to office workers to become more of an office catering service.

Now, the Silicon Valley-based company has hired branding agency Teak to reimagine the service as it expands into new markets and raises its overall awareness.

The new concept is based on a character known as “The Lunch Guru," a hippie-looking bearded man whose main purpose in life is to "spread lunch enlightenment to people that work in corporate environments" and that a good lunch can make any employee a happier and more productive human being at work.

The multi-faceted campaign launches with five videos on YouTube that showcase LG’s insight and meanderings with the end tagline, "Teach Me Lunch Guru." One clip, for instance, finds him pruning a broccoli head while speaking his profound thoughts against taking a light lunch over taking a lunch lightly.

The videos are supported with a new mission statement, brand vision, and overall voice. The company's visual identity has been updated with a new logo, typography, and color palette evidenced on packaging and the Eat Club website.

The rebrand is timed to coincide with the company’s entry into the Los Angeles market where the concept of online, personalized office lunch delivery is not as familiar as it is in the Bay Area.

The Eat Club is investing behind this initiative with a very "tactical focused budget" targeting office managers specifically in LA’s Silicon beach area, with the potential for the campaign to roll out to San Francisco, Seattle and New York City.

The Eat Club has money to spend, having raised more than $16 million from investors. The company delivers 10,000 meals a day to companies including Netflix, Tesla and Cisco.