Toyota Back In 'Playing House' For Camry 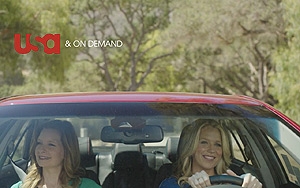 Toyota is once again running an integrated campaign with USA Network’s “Playing House,” in its second season. Toyota was there in the first season too, to tout the Highlander SUV. This season the focus is the Camry sedan. The program, via Santa Monica-based entertainment content marketing agency Brand Arc, has both Camry and Highlander in upcoming episodes of the show. It also has the show's characters in custom content for video-on-demand viewers. The custom content is thematically tied to the  “Playing House” episode during which they air.

In addition, Toyota, Samsung and Comcast sponsor a digital broadcast of the following week’s "Playing House" episode on VOD, immediately after the current week's episode broadcast on USA.

The first Camry vignette debuted on Aug. 25, a week before the on-air premiere. The 60-second (slightly longer) versions of the vignettes air during the Sept. 1 and Sept. 8 episodes, which also feature major Toyota integrations, per Brand Arc President and founder Rob Donnell. “Each vignette will air before a ‘traditional’ Camry commercial that is part of Toyota’s ad buy,” he says. “We have found that when commercials are paired with in-show integrations and custom vignettes, they generally receive 30% lift in brand recall.”

Donnell tells Marketing Daily that the Camry vignettes will run within the episodes via full-episode player on USA Network’s site. They will also be posted on the “Playing House” Facebook page and Twitter feed the day after its airing. Toyota will share them too, along with behind-the-scenes content across its social media channels.

Says Donnell: “Research demonstrated how Playing House's audience increases significantly across VOD viewings. We realized there was a huge opportunity to reach viewers who watched the show this way. So, we developed custom show content for Toyota.”

In one of the vignettes, the character Emma (Jessica St. Clair) and Maggie (Lennon Parham) argue about the car's voice recognition features, with Maggie insulted that Emma seems to be better friends with the voice (“Cams”) than with her.

Donnell says the key is to “Find a gem and get in early with the right content. That is what we did with ‘Modern Family’: We discovered the show while it was in development.”

He adds that women are the primary audience for the show, but that there are several reasons the series is a nice fit. “[We] are always looking for clever ways to present Toyota’s vehicles as vivid ‘characters’ that are part of people’s lives, and to show off their attributes and features in ways that entertain audiences and advance the storytelling.”

For Camry specifically, he says, Toyota wanted to showcase the Camry's new styling and image, “And the character Emma is the personification of a fun, sexy Camry driver.”