Mature Markets (defined as North America, Western Europe and Japan) will contribute more to global ad spend growth this year than Rising Markets (defined as everywhere else) for the first time since 2006. Partly as a result, ZO is reducing its forecast for growth this year by an additional 0.2 percentage points, putting global growth at 4% to $554 billion. That’s a downgrade of nearly a full percentage point for 2015 compared to its initial forecast for the year last December.

Spending growth in North America will lag the global pace this year with ZO estimating a 3.5% increase. Growth in the region will reach 4.2% next year, with help from the Olympics and U.S. elections.

"There has been broad-based deceleration across the world as marketers have moderated their expectations of global economic growth,” the agency stated in its forecast update just issued. “With Brazil and Russia in recession, and China slowing down, the world can no longer rely on emerging markets to set the pace of growth.”

But the agency added that the rising market slowdown is probably “a temporary aberration -- Rising Markets will become the leading contributors to ad market growth again in 2016, and will increase their market share from 37.4% in 2015 to 38.8% in 2017.”

Asia is one area of concern. While China’s ad market has not been substantially affected by the turmoil in its stock market, the slowing economy and concerns about the potential for future growth have caused advertisers to moderate their spending slightly.  The agency is predicting a decline in spending growth in China to 7.8% this year from 10.5% in 2014.

Still, growth in China this year will be twice as much as the global ad market’s, which places China as the 13th-fastest-growing ad market of the 81 markets ZO analyzes. (The agency is also replacing its third-party estimates of Chinese ad spend with proprietary new figures that it believes accurately reflects the true levels of ad spend in the market. The previous figures substantially underestimated the scale of advertising activity in China, which ZO now values at $68 billion in 2014, up from the previous estimate of $46 billion).

Next year, global growth will accelerate to 5%, boosted by the 2016 Summer Olympics in Rio and the U.S. Presidential elections. Spend will slow down slightly in the absence of these events, growing 4.4% in 2017.

The market share gap between the two media will narrow from 13.3 percentage points in 2014 to just 2 points in 2017. At this rate of growth, internet advertising will overtake television in 2018.

At the same time, paid search is projected to grow at an average rate of 13% a year to 2017, driven by continued innovation from the search engines, including the display of richer product information and images within ads, better localization of search results, and mobile ad enhancements like click-to-call and geo-targeting.

"Search platforms are also improving the addressability of their ads, giving advertisers more control over where, when and to whom their ads are exposed," says ZO.

“We are now witnessing the fastest transition of ad budgets in history as marketers and agencies scramble to catch up with consumers’ embrace of the mobile way of life," stated Steve King, ZenithOptimedia CEO, Worldwide.

ZO is the latest forecaster to cut its 2015 forecast; GroupM did so last month. 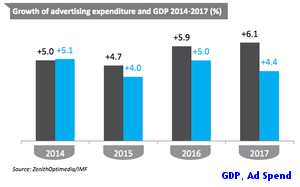