Ad Economy Continues To Recede, Even Digital Not Immune: Display Market Falls 7% During First Half

With six months of data in hand, WPP ad tracking unit Kantar Media now projects ad spending will lag U.S. economic growth for the fifth consecutive year in 2015. That’s a “streak that might have once seemed unimaginable, but now would seem par for the course,” states Kantar Media Chief Research Officer Jon Swallen.

Swallen didn’t go so far as to predict that there has been a fundamental correction in the relationship between ad spending and U.S. economic growth, but he implied it, noting that the “prevailing view of the advertising market has become more tempered” as 2015 unwinds. Nearly five years after Madison Avenue emerged from the “Great Recession,” Swallen says U.S. ad spending is continuing at a “lethargic pace.”

The second-quarter data being released this morning by Kantar estimates that measured media ad spending declined 3.9% -- the same rate of erosion as the first quarter and the first half of the year. The malaise has impacted 15 of the 22 individual media types tracked by Kantar, with only seven posting gains.

Even digital media are showing signs of maturing, especially the Internet display advertising category, which declined at a faster rate -- 4.7% during the second quarter and 7.0% during the first half -- than the overall U.S. ad economy.

The display estimates are pure-play and do not include video or mobile ad formats, suggesting a stratification is occurring within the Internet ad marketplace with scarcer video and mobile Web impressions being seen as “premium,” and static display being seen as more of a “tonnage,” or commodity medium.

“Lower CPMs and reduced page traffic contributed to the spending declines,” Kantar noted in the report, suggesting the display ad market is experiencing a double whammy of decreasing price and volume, factors that would suggest a system commoditization is taking place as advertisers and agencies pursue more premium inventory.

Paid search also proved to be resilient, expanding 7.7% during the second quarter.

Among analogue media, print continued to erode at pronounced rates, while both radio (+5.0%) and out-of-home (+4.0%) were the two bright spots during the second quarter.

While there were mitigating factors for some media like television, which had tough comparisons with last year’s Winter Olympics stimulus, but generally speaking, everything eroded.

In fact, all but one -- pharmaceuticals (+13.2%) -- of the top 10 ad categories receded, suggesting the U.S. ad economy is in recession, even if the general economy is not. 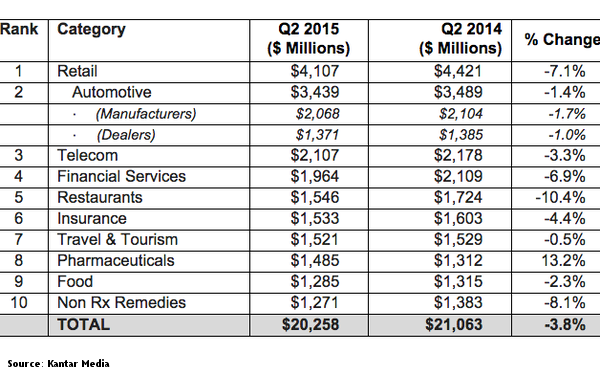