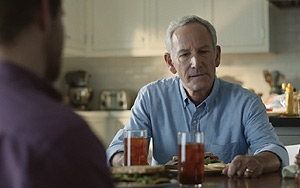 Kia is launching new U.S. ads for the 2015 Kia Optima. The effort positions the car as an aspirational vehicle for Millennials, while associating it with the enduring, young-American urge to hit the road, except not Jack Kerouac style, but in a nice car, with dad.

The effort -- comprising TV elements, out of home, and digital -- says experience, not money, is what matters in life, and the Optima can give you that experience while also looking good, handling well, and helping you with GPS so you don't have to jump a box-car for the Denver rail yards (to strains of Dylan's own on-the-road song).

Two spots, both with Spanish-language versions, launch the tag line “Discover the New Kia.” In the first a young man confesses to his dad that he has quit his job and will hit the road to explore the U.S. of A. There's a pregnant pause, during which we expect the kid's father is winding up a left hook. Instead he confesses he wishes he'd done that when he was young. Cut to the two of them on the road together.

David Angelo, founder of David&Goliath, tells Marketing Daily that the campaign was inspired, in part, by his own missed opportunity to hit the road. “I always wanted to take a trip across America and in '92 was ready to do it.” He had planned to, but got pulled into the ’92 Presidential campaign working on behalf of one of the candidates. “So I never ever was able to take that trip,” he says.

He adds that the same idea — seeing the country from the road — is still alive in younger people. “When we were concepting, it was all about this notion of today's Millennials, and they are so much more free to do things like this; the older generation is all about work and putting their nose to grindstone.” He says the creative is about taking traditional life stories and twisting them in different way. “You expect the father to say, ‘how dare you quit,’ but we learn it was something he always wanted to do, just like I always wanted to do it.”

The larger insight, says Angelo, is that there's a generation out there that could care less about how much money they have. “They do value having great products, but ones that can deliver meaningful experiences. So, it's less about a father and son road trip than a son who wants to be able to whatever he dreams of doing; and it doesn't matter what generation you are, everyone can feel a need to break away.”

Another spot, launching next week, has a father buying his daughter a new Optima as a birthday present. But as he drives the car home, enjoying its various features, he starts to rethink the whole car-as-gift thing. Kia's long-time agency in the U.S., David & Goliath handles. The effort includes includes digital pre-roll ads, and billboards in Los Angeles, New Jersey, Chicago, Atlanta and West Point, N.Y.