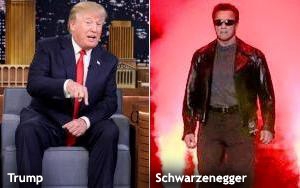 NBC’s announcement earlier this week that Arnold Schwarzenegger will replace Donald Trump on “The Celebrity Apprentice” raises so many questions and creates so many tantalizing angles to explore that one hardly knows where to begin.

NBC’s press release issued this past Monday came as a complete surprise. The announcement was this: “The Celebrity Apprentice” will return during the 2016-17 season with Schwarzenegger as “host.”

I don’t recall Trump ever having the title of “host” of the show, but Schwarzenegger’s role will be the same. He’ll play the boss -- the one responsible for passing final judgment on the contestants, in the end firing all but one. Will he declare “You’re hired!” at the season’s end? That remains to be seen

The announcement that Schwarzenegger has been cast and that the show will continue runs counter to the prognostications of most observers who were confident the show would never return after NBC severed its business ties with Trump last spring following his infamous remarks about Mexican immigrants being rapists. NBC claimed the show would return in some way, but almost no one believed it.

So now the show is coming back more than a year from now. For his part, Schwarzenegger waxed enthusiastic about this new gig in the ebullient statement the p.r. folks at NBC composed for him. “I have always been a huge fan of ‘The Celebrity Apprentice’ and the way it showcases the challenges and triumphs of business and teamwork,” he claimed in the statement, presumably delivered in his famed Austrian accent. “I am thrilled to bring my experience to the boardroom and to continue to raise millions for charity. Let’s get started.”

In the press release’s lead paragraph, Schwarzenegger, 68, is described as a “twice-elected California governor and international movie superstar.” The press release makes no mention of the marital scandal that severely tarnished his image. Lest we forget, he impregnated one of his housekeepers. After his wife Maria Shriver found out about it, she filed for divorce. The story of his affair became public in May 2011.

Ever since, Schwarzenegger’s popularity has been in freefall. NBC must believe the scandal will not be enough to repel viewership of “The Celebrity Apprentice” or else the network would never have hired him.

By the same token, ABC must believe that Paula Deen’s racist statements and behaviors won’t turn off viewers of “Dancing With the Stars” either. Deen is a contestant on the current season of the show that started last Monday night. She made no racist statements on the show, but she danced terribly, belched loudly and made an off-color remark in which she claimed that she was so nervous about her “DWTS” debut that she soiled her white underwear. It was gross.

I happen to think a lot of people are turned off by both Schwarzenegger and Deen and won’t watch any show on which they appear. But, hey, I’m not smart like a TV executive.

Once upon a time, Schwarzenegger, an immigrant, harbored ambitions of becoming president of the United States, but his foreign birth (in Austria) barred him from running. Trump, meanwhile, is running for president, and basing much of his campaign on his strong stance in favor of strict immigration controls. And on the matter of birth origins, we all know where he stands on that.

Trump’s reaction to the Schwarzenegger news was supportive. “He’ll be great & will raise lots of $ for charity,” Trump said in a tweet.

If Trump found it ironic that he was being replaced by an immigrant -- as others have observed -- he didn’t mention it.