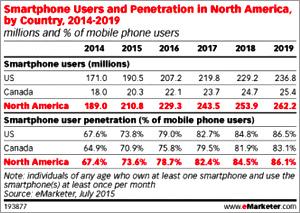 More than 60% of people in North America use Internet via mobile, says eMarketer.

That puts the U.S. and Canada at ninth and 10th place on a global ranking for Internet penetration, respectively.

Within four years, 83.3% of North Americans are expected to access the Web regularly.

In both countries, over 70% of mobile users (about 80% of the total population) own a smartphone. That means that about 60% of the population in North America will access the Internet via smartphone in 2015 -- a number that is expected to rise to 70% in three years.

These findings are consistent with other recent studies from various market observers. Users spend 51% of their digital media time on mobile, compared to 42% on desktop. They are also starting to spend more time viewing media in a vertical format rather than a horizontal format.

The vast majority of user time on mobile is through apps, and according to Pew, 7% of adult smartphone users, and a host of younger users (15%, with some variation between different demographics) are “smartphone-dependent”– meaning they don’t have access to broadband internet except through a mobile device.

Western Europe is closing the gap in terms of cell phone penetration, but it won’t catch up to North America by the end of the forecast period.

Stateside, mobile will account for 51.9% of total digital spending in 2015, the research firm predicts. While desktop's share of ad dollars is expected to decline slowly through 2019, mobile's share will skyrocket.

Indeed, mobile advertising is expected to grow by 59% in 2015 -- an even higher rate than eMarketer forecast in March.

The shift to mobile is being driven by consumer demand -- and not just from the young. Even U.S. adults are spending two hours and 51 minutes a day on non-voice activities on mobile devices, eMarketer estimates. More than half of that -- or one hour and 31 minutes -- is believed to be spent on mobile phones.

This year, display advertising should continue to account for the largest share of the mobile ad market, capturing 51.1%, or $15.55 billion. Within display, banners, rich media and sponsorships will account for $12.77 billion, and video $2.78 billion. Search ads account for the second-largest share, 44.7%, or $13.62 billion.