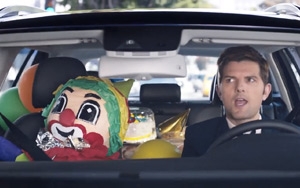 Bye, horsepower; hello, connectivity. Have telematics or go home is the rule of thumb today. Volkswagen of America, Inc. is the latest to give a big voice to its  comprehensive connectivity package. A new ad campaign from the Herndon, Va. automaker touts its brand new infotainment system, MIB II, and its smartphone integration technology, called App-Connect.

The campaign, via Interpublic unit and Volkswagen AOR Deutsch, launches with a pair of humorous 30-second television spots starring celebs Adam Scott, Michael Peña and Christopher Mintz-Plasse. In one of the spots there's a party that one of the three is having, complete with a pinata. A three-way call ensues using each person's respective App-Connect feature. They navigate the App-Connect platform, including maps, directions, store searches, and the like with voice commands, the vehicle’s touchscreen, and steering wheel controls. The themeline: “The things you love on your phone, available on 11 Volkswagen models.”

The effort includes a series of digital and social ads. The television spots and social videos have all been created to highlight the brand’s advanced smartphone integration technology, while reflecting current social media trends. In addition to the TV spots there are several short-form social videos. The digital aspect of the campaign centers on a microsite delving into the three main service functions of Volkswagen’s Car-Net connected-car program: App-Connect, guide and inform, and security and service.

Todd Riddle, ECD at Deutsch, tells Marketing Daily that the agency chose those particular actors because they resonate with the target audience -- basically anyone considering purchasing a Volkswagen, and because they are good actors who can also do improv. “They can take a story that is in essence about the functionality of a piece of technology and make it feel natural, and humorous. They also have great chemistry -- which we think comes through on the screen -- making the spots and social videos feel natural,” he says. “Even if you don’t know them by name -- you likely recognize them from seeing them on the screen somewhere -- but the concepts don’t rest solely on their recognizability.”

Volkswagen says App-Connect will be available on three-quarters of its 2016 U.S. market models starting with the 2016 Tiguan and Golf R, which are in showrooms now. Two 2016 Volkswagen models will not have the technology: the Touareg SUV and the Eos sub-compact.

This year's Initial Quality Study by J.D. Power looked at considerations that most influence consumers to buy a given vehicle. Infotainment is there just yet. The leading factors are still pretty standard: Quality of workmanship leads, followed by safety; then fuel economy, price, ride and handling, reputation and reviews, brand and model experience, exterior styling and expected reliability.