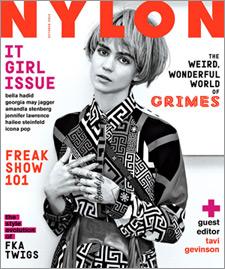 The development deal includes a long-form series about Nylon.

The deal also calls for cross-promotion for both Endemol Beyond USA and Nylon programming through each other’s outlets and social channels, including Facebook and YouTube.  On the Endemol side, that includes the production studios’ Icon Network, which produces programming spanning topics such as beauty, fashion, wellness, do-it-yourself, food, and travel, as well as its new Looksy pop culture network, set to launch in early 2016.

On the Nylon said, the style publisher will serve as the launch partner for Just Entertainment’s e-commerce series “She’s Gotta Have It,” developed in collaboration with the Icon Network.

Earlier this year, Nylon named Michelle Lee CMO and head of brand strategy, overseeing all branded and native advertising, in addition to her duties as editor in chief for the company’s online and print properties.

On Lee’s watch, Nylon hired Shruti Ganguly to spearhead its video production efforts in the newly created role of vice president for TV and video at Nylon.