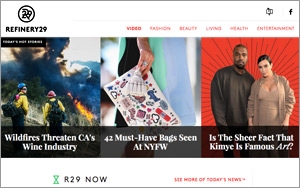 Lifestyle publishing juggernaut Refinery29, which has built an online media empire covering fashion and culture, is expanding overseas with its first international branch in Europe.

The European division will be headquartered in a new office and Web site in the UK, set to open in November, with offices in Germany and France to follow next year.

Leading the new overseas division is vice president of international Kate Ward, who previously served as associate director of global business development at Endemol Shine, the global video production network based in the Netherlands. She was also vice president of its Shine Network and head of commercial and strategy at Shine TV.

Ward's appointment suggests video will play a central role in the European expansion, as it has in the company’s success in the U.S.

Refinery29 co-founder and co-CEO Philippe von Borries gave some insight into the company’s strategy in a statement: “Right now, there is a unique opportunity for digital first media companies, where international market share can be rapidly acquired by leveraging existing audiences and the vast spectrum of global distribution channels.”

In April, Refinery29 raised $50 million from Scripps Interactive Network and WPP to fund its international expansion, in a round of investment that valued the publisher at $290 million.

That investment was part of a wave of deals giving established media companies stakes in digital upstarts. In August, NBCU invested $200 million in BuzzFeed and $200 million in Vox Media. Previously, Disney acquired Maker Studios for at least $500 million in 2014 (possibly more if performance goals are met) while A&E, co-owned by Disney and Hearst, invested $250 million in Vice Media.