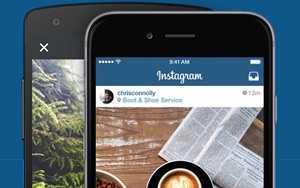 Don Mathis, CEO of Kinetic Social, says the company was invited to beta test the Instagram ads API in August, and was able to launch their first test campaigns within a few weeks. Having already worked with Facebook, he says, they had some ads that were properly formatted.

So far, the results have been promising.

Brands like Sunoco, Amore Pacific, H&M and Automatic (the driving app) have all seen successful campaigns so far. Sunoco saw 22% completion rates for ads, while Automatic got a 14% engagement with one campaign on Instagram’s platform.

“Instagram for sure will make it as an ad platform. It has a large, very loyal user base,” says Mathis. He says he was surprised by how different Instagram and Pinterest were as ad platforms, having expected them to be similar in their uses as a marketer.

“The thing that’s really cool with Pinterest is the earned media lifetime value of a paid media post,” says Mathis. “The half-life of a pin is the longest we’ve seen in any of the media formats we’ve worked with. Our API opened in April, and most of the paid pins we did in the May time frame are still generating organic traffic today like they did in June.”

However, he says, Instagram has access to Facebook’s user data and analytics -- which gives it a leg up on the competition. As a purely visual medium, it may be an even better full-frontal solution than Facebook, he says.

“From our perspective,” says Mathis, “there is no question to us that the walled garden phenomenon is here to stay — the data is so good…identity-based targeting works better.”